Sections
Top Around the Web
CompareComparing...
313

by Happy NagashettiFebruary 25, 2015
0
Now Reading
And the Award For the City With the Most Infected Internet Goes to New Delhi
Browse This Page Internet in India is slow, we all know that. In fact, it’s the slowest amongst all its contemporaries. It’s a shame that even with an economy as big as India, internet, the basic necessity to compete in the 21st century market is available at dismal speeds. A new report from F-Secure states that New Delhi, the capital of India is the worst place to connect to the internet.

F- secure, the Finnish computer security company has come out with its “The State of Internet in India” report. It states that the Indian capital ranks on the top of the ranks of most infected computers. The city has 20 percent of all the infected systems in India. Following Delhi, with 9 percent each is Chandigarh and Hyderabad and with 7 percent is Chennai. 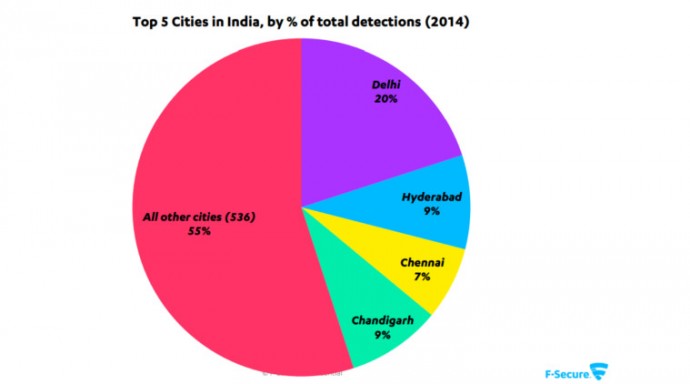 One of the reasons cited for these high levels of infection is the use of pirated softwares that are often tainted. Botnets were found to be one of the major infections affecting the systems across the nation. Hackers use Botnet to take control of PCs and use them for their malicious intentions such as spams or DDoS attacks. The lack of computer awareness amongst users is also seen as a cause for the high levels of infections.

Smartphones are also at risk of these attacks. Mumbai with 22 percent tops the chart in smartphone infections and following it, of course, is New Delhi. The major malwares in the Android ecosystem are Android/SMSSend and Android/FakeInst. These malwares send malicious SMS to the contacts of the user and thus multiply. Another malware called Android/SMSreg gets on the system when the user connects to free wi-fi. Hackers can gain access to all the personal information including GPS location, IMEI number, network operator, package name and SDK version. All of this point to the fact that Indians are in a desperate need of a safety and security lesson when dealing with the digital market. We need to get more serious in terms of cyber-security and tackling malware. In the digital economy, the threats will be digital too, so preparedness needs to be the biggest priority.