The 200GB microSDXC card will sell for about $400 when it arrives in Q2 of this year, and your phone should be compatible with SDXC standard to make the card work. It is claimed to have transfer speeds of about 90MB per second, or approx. 1,200 photos per minute. 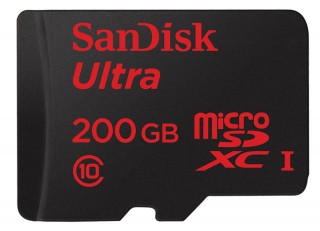 Meanwhile, SanDisk’s Memory Zone app for Android can automatically transfer data to the microSD card at times when storage is limited on a smartphone or a tablet.

In addition, the company also announced 32GB and 64GB high endurance microSD cards, specially created for dash-cams and home security systems. These high endurance memory cards can withstand extreme temperatures such as heat and extreme chills. These high-endurance cards are also designed keeping in mind heavy duty video recording. They come with a two year warranty and will be available in the U.S, Europe and South Korea.

Abhinav Mishra
iGyaan Network's Newbie, Abhinav Loves Gaming, Cars and Technology, You can Find Him on PSN Bragging About his FIFA Skills.
You Might Also Like
LatestMultimedia and Storage
Read More