We have smartphones that can achieve anything on the go. They’ve freed us from the need to carry around a map, dictionary, camera and basically a full-blown PC. But the thing that has continued to haunt these devices is their battery handicap.

As soon as the battery sign hits the dreaded red colour, its time to cut all operations. And sadly, for most of us this happens midway, through the day. The only upside to this miserable tale is that it has given birth to a whole new industry. Meet the power banks. Nearly all major companies have launched their own portable packs that help our smartphones survive a whole day and more.

We pit them against each other in terms of design, size, durability and most importantly, power. Starting off with the oldest, we tested out the 10,400mAh version for you, though it is available in 5,000 mAh and 16,000 variants as well. When it comes to design, the Mi power bank has a textured anodized aluminum casing that covers the entire battery and has a smooth metallic finish. As with some of the other Xiaomi products, this one also looks like it has followed Apple’s strict visual guidelines.

The credit card-sized devise easily fits in your hand (and your pocket). It is claimed to be water and corrosion resistant. The surface is a bit slippery but that can be easily addressed by using the rubber case provided with it. The LED indicators for battery level especially stand out against the unadorned surface. Though it’s slightly on the heavy side, about 250 grams, but it’s the one which comes with maximum capacity. This factor alone will keep the user from complaining about the extra weight. The Mi Powerbank turns on automatically when a device is plugged in for charging. To check how much battery is left on the device, all you need to do is press the power button once and the LED indicator displays how much battery remains. The OnePlus Power Bank is available in both Sandstone Black and Silk White with a capacity of 10,000mAh. The company claims that it easily slips into your pocket and can fully charge your OnePlus, thrice. The major advantage of this one over the others is the fact that it comes with two USB ports so that you can charge two devices at once. Unfortunately, the device cannot be charged and plugged into another device at the same time; the two actions need to be done separately. Design-wise, we checked out the white model and it looks extremely stylish. It resembles a small notebook, and the matte white casing feels good to touch. The fact that it is slimmer than the rest on this list may be appreciated by some but it’s too large to comfortably carry around in your pocket. Since portability is the biggest criterion when picking up a power pack, this point is important to note. This powerbank is wide and tall, so if you’re used to lugging around a backpack or bag then this shouldn’t affect your decision to purchase the OnePlus powerbank. The simplistic design skips out on the power button, however the LED battery indicators can be lit up by shaking the power bank. 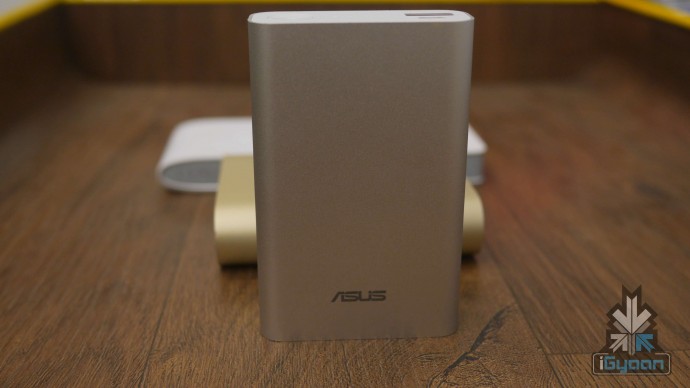 Design-wise, read the Xiaomi section, because the two are nearly identical. The only exception being that the Asus ZenPower is smaller and lighter. It features the same aluminium finish, rounded corners and hosts only one device at a time. It comes with LED indicators and a power switch, which function in the same fashion as the Xiaomi power bank. It is accompanied by a rubberised cover, which helps protect the device against scratches. Asus gets another brownie point for launching the powerbank in multiple colours – the black colour variant looks especially attractive. According to our performance tests, the Asus ZenPower takes 4.5 hours to charge fully with a  5V/2A plug and a standard cable, meanwhile it took 12 hrs with a 5V/1A plug and a standard cable. After which, it is capable of charging the iPhone 6 Plus (2915mAh battery) 3-4 times. The ZenPower demonstrates that it has the capacity to fuel devices slightly more than the OnePlus and the Xiaomi charger. With the three devices, there were zero complaints in terms of functionality and the workings. They all feature LED indicators, are heavily protected and provide your devices battery when they need it the most.

However, having used the three power banks interchangeably over the past few months, we can easily say that we’d pick the Asus ZenPower over the other two. While it may be the most expensive of the three, it is also the lightest one. Since a battery pack is an extra device that you need to carry around – the portability of the device matters the most. The OnePlus one is too wide to carry around easily, and the Xiaomi powerbank feels heavy.

Arguably, if you don’t want to spend the extra Rs. 500 on a battery pack then go for the Xiaomi – it makes for a good second option. The only major advantage the OnePlus carries is the fact that you can charge two devices at once. If you’re used to carrying around multiple handsets, then this one is for you.