iPhone 6s and 6s Plus Review : A Big Touch up

by Bharat NagpalOctober 16, 2015
11
Now Reading
iPhone 6s and 6s Plus Review : A Big Touch up
Browse This Page Each year Apple’s revisions of their iPhone have propelled sales of their handsets. The Apple iPhone 6 and iPhone 6 Plus were the company’s best selling handsets since the launch of the original iPhone.

There are no points here, the design of the iPhone is not a lot different from what we saw last year, in fact, it’s a bit thicker and slightly heavier. You will also get a brand new Rose Gold colour which has attracted the fancy of many a folks. That being said, last year’s iPhone was the best selling iPhone for Apple, it was a refreshing design change from the iPhone 5s and rounded look felt more in harmony, as opposed to the square design which Apple followed for the 4-5s.

This year’s iPhone has an improved outer shell which offers resistance against the “bendgate” issue of last year’s iPhone. The new reinforced and strong series 7000 Aluminium adds strength to the outer structure. The iPhone 6s and 6s plus also come with some form of water resistance according to tests conducted by third parties. Apple downplayed the fact that the new iPhone was water resistant, in fact they don’t mention it anywhere. They coated the logic board with water resistant materials and added a rubber gasket to all parts that could potentially allow water to seep through like ports, display edge and buttons.

You could end up with your iPhone in the toilet, and still be using it a week later (hopefully after you have fully sanitized it ).

The “s” variants of every iPhone till date have been the ones with hardware improvements. The iPhone 3Gs, 4s, 5s and now the 6s all add improved hardware and capability while keeping design changes to a minimum. Compared to the iPhone 6s’ 1330 x 720p display , the Apple iPhone 6s Plus gets a larger display with a 1920 x 1080p resolution. It also gets a bigger battery and Optical Image Stabilisation in the rear camera. Everything else on both the devices is identical in terms of specifications. Apple sticking to the old displays is one big let down. iPhones need higher resolution displays and this update may finally come in the iPhone 7. This time around however Apple has added 3D touch, which is a variant of their force touch trackpads for the iPhones.

This is something that Apple showed off at the launch, but it still feels under played. The technology is pretty impressive, and even though many companies have done this prior to the iPhone 6s’ launch. Apple’s iteration is impressive, accurate and easy to use.

Unlike many devices in the past, the iPhone’s display in itself is not clickable. The display senses the force on the screen which is paired with where your finger is on the screen, this then results in the outcome you receive. 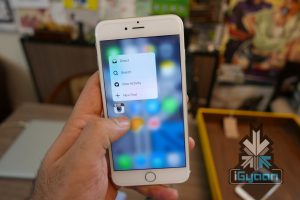 The usability of this is a little strange at first but then it gets easier and easier. The peek and pop UI of iOS 9 makes this feature infinitely fun.

Things like messages and mail become easy to read or dismiss and the animations are really impressive. When you click down on an app the background blurs out and enhances the look of your touch and the experience of using the 3D touch. iOS9 lets you set live images as wallpapers that you can preview simply by pressing down on the screen. Its quite cool, and you can relive your fun moments of the perfect picture right from your lock screen.

And with apps like WhatsApp and Instagram taking advantage of this feature, soon iOS will be a mega 3D touch playground. However, this might happen later than sooner, because most developers will take a long time to implement this feature. The new Apple iPhone 6s and 6s plus come with enhanced cameras, keeping Apple’s image processing standards intact. the new 12 MP camera at the back offers a larger resolution keeping the pixel size at 1.22µ pixels and the aperture at f2.2.

The addition of 4k Video means that the iPhones have finally caught up to rest of the world. It also means that buying a 16 GB iPhone has become more or less pointless. The 4k video is turned off by default and there is good reason, 1 Minute of 4k video will take approximately 375 MB whereas 1080p video will take as low as 130 MB. The image quality is fantastic and lowlight images are impressive. You get exception control of exposure and focus prior to capture, so you can compose shots with ease.

The HDR images have been best on the iPhone so far and that remains the case with the iPhone 6s and 6s Plus. The OIS on the larger version iPhone 6s Plus helps people with shaky hands to capture better images and video.

The Live images are also a fun feature only when you understand that you need to keep your hand stable for longer. Else you end up with Live video loops ending with shots of your feet, or even worse, shots of your nostrils when clicking selfies. This also consumes more storage and 16 GB owners should stay away from this feature. This can easily be disabled from the camera interface.

Previous iPhone users will be happy with better resolution cameras, especially the front camera, where an overhaul was long overdue. The selfies are improved and also support the live photos feature. 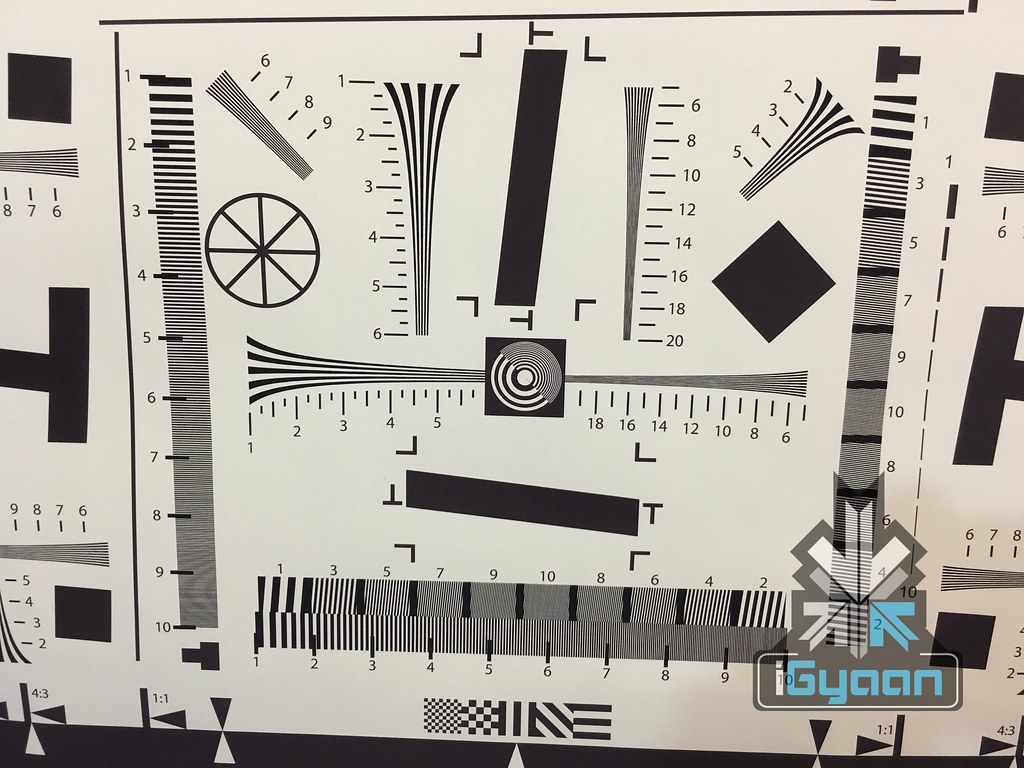 Live photos are nothing new, HTC did this with ZOE and many manufacturers and apps have had this feature. However, all of them worked on the principle of capturing video and then saving a still from that. The iPhone 6s and 6s Plus, unlike the others in the past, captures a burst of high res pictures in a .MOV format along with the main image. Therefore not affecting the quality of the image, technically this is multitasking for the camera and is an innovative way to execute live images. You can also set the live images as a lock screen wallpaper and execute the 3D touch to preview them whenever. They are like your own personal Vines.

This is major improvement on the overall usage of the iPhone. The iPhone 6s and 6s Plus are both faster and snappier when compared to the iPhone 6 and 6 Plus. iOS is already pretty fast and smooth. The operation on the iPhone 6s is a lot better. iOS 9 was designed primarily on the new iPhones hence you get a phenomenal experience. The new peek and pop UI works really well. New animations and live photos as wallpapers is an appreciated add-on. The fact that there is more RAM on the new iPhones means that games work in a better environment, loading and caching works better too. Apps that utilise this additional RAM speed up as well. The camera has a more prompt response and images are clicked and processed quicker.

The network strength is much more improved. Tested on Airtel and Vodafone in Delhi and Mumbai. on LTE Speeds upto 50 Megabits are easily available, however that is more network provider dependent. Compared to iPhone 6 and Samsung Galaxy S6, network speeds are faster and network strength is better on the new iPhone 6s and 6s Plus. During the tests we also faced lesser network drops and overall sturdier network performance. Battery life is improved over the previous Gen iPhone 6 Plus and the network improvements could be a major contributor.

The new Apple A9 chipset is also better balanced to give you an improved battery performance. While “batterygate” has been said to be insignificant, the TSMC chipset is considered an advantage. The iPhone is an ever growing phenomenon, the more people use the ecosystem the more it makes sense. And while the battle between Android and Apple iPhones is one that will never see the light at the end of the tunnel. The iPhone is clearly the most popular single handset in the world and the iPhone 6s and 6s Plus improve on that with the right kind of things. The hardware running the handset sees a major bump, and the cameras are a lot better and everyone will appreciate that. Live photos work well, and for the moment seem to not be a gimmick.

Soon third party apps will allow sharing of live images and it will become a phenomenon. 4k video is better too, so is network reception and battery life. But, that’s the thing a regular user is not concerned with the use case scenario of all the above features. Sure a better battery and better cameras are good things to have. And 3D touch is great to use and a really productive and time saving feature. However, how big of an improvement is it over the iPhone 6? Not a big improvement, but logically a significant one. Most iPhone 6 owners can and should skip this version for the iPhone 7 which will bring all this features and more with a more significant design change.

But, to sum it up, the iPhone 6s and 6s plus are sturdier iPhones, with new water resistant capabilities, a stronger chassis, cameras that are superior, a new screen technology, seriously fast processing capabilities, better battery life and better network capabilities. You also have new features like live photos and peek and pop capabilities which are not only fun but functional and unique to the iPhone for the moment. You also have the [s] badge on the back of the iPhone to show off to your friend who owns an iPhone 6. Pricey sarcasm aside, the new iPhones are brand new phones and hopefully all apps will allow users to exploit the functionality of things like peek pop and 3D touch, at least before the iPhone 7 arrives. There is also the price factor, each variant of the iPhone in India is significantly pricier than last year’s iPhone.

However that has not stopped people from pre-ordering the iPhone 6s and 6s Plus before it goes on sale officially today.