The Samsung Galaxy Note 7 will launch on August 2 a whole month prior to the usual launch cycle in order to combat the huge jump to the new Apple iPhone claim experts.

But, as the launch draws closer and closer the Samsung Galaxy Note 7 details seems to be clearing out. Two separate Galaxy Note 7 devices are doing the rounds of benchmarks and they not only have different chipsets but different specifications too. 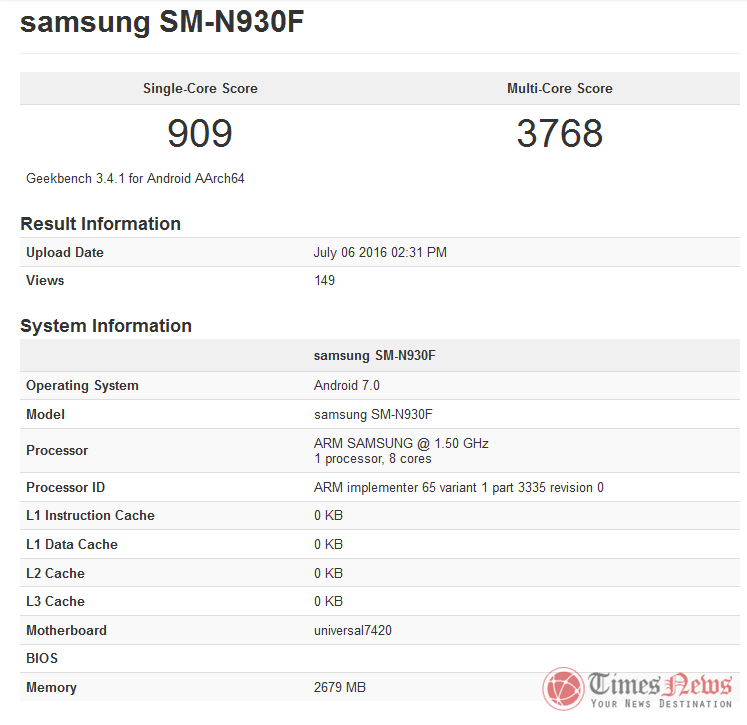 The first one spotted on benchmark site Geekbench, with the model number SM-N930F appears to be  powered by a 1.50 GHz octa-core Exynos 7420 processor with 3GB of RAM and runs on Android 7.0 Nougat. This variant scores 909 points in single core test and 3768 points in the multi-core test.

A second Samsung Galaxy Note 7 SM-N930V, is listed at AnTuTu with a qHD display resolution of 2560 x 1440 pixel. It runs, Android 6.0.1 Marshmallow OS but has a Qualcomm Snapdragon 820 processor with Adreno 530 GPU, and not the rumored Snapdragon 823 we have been hearing about this phone also has 4GB of RAM and 64GB of storage which matches with the internal memo obtained by iGyaan a few days back. Rumors of a Galaxy Note 7 running on 6 GB of RAM with the Snapdragon 823 chipset seem to be diminishing as we get closer to the launch. It also seems that Samsung may think that 3 GB of RAM is sufficient for markets where it will sell the Exynos variant, markets that include India, Malaysia and China.