Android 7.0 Nougat For OnePlus One and Android 7.1 to OnePlus Two and OnePlus 3 Soon

by Bharat NagpalNovember 1, 2016
59
Now Reading
Android 7.0 Nougat For OnePlus One and Android 7.1 to OnePlus Two and OnePlus 3 Soon
Browse This Page The refresh cycles of OnePlus handsets have been poorly placed and the company has usually taken a long while to push Android updates to their devices. However, that may change with the Nougat release.

Benchmarking websites are recording data from the OnePlus One, OnePlus Two and OnePlus 3 with Android 7.0 and 7.1 Nougat installed.

The Qualcomm Snapdragon 801 chipset, which is featured on the OnePlus One is considered to be not compatible with the Vulcan API required for Nougat. However, it could simply be a test install without the Vulcan Graphics API, or the company may be working on a final build for its users.

According to Geekbench, the OnePlus One gets a Single core score of 976 and a Multicore score of 2521 while on Android Nougat 7.0 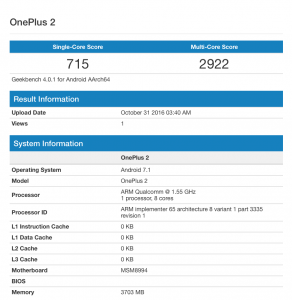 OnePlus 3 is showing an impressive score while on Android 7.1 for Single-core reaches 1747 and a score of 4007 for Multi-core. The push update for the OnePlus Two with Nougat could be bundled with the OTA update said to enable VoLTE on the handset. The company may also enable the support for OnePlus X and OnePlus One, but no official word for that has been given out.

The OnePlus 3 may be phased out for an intermittent handset called the OnePlus 3T which will be designed around a Qualcomm Snapdragon 821 chipset and will launch in December.