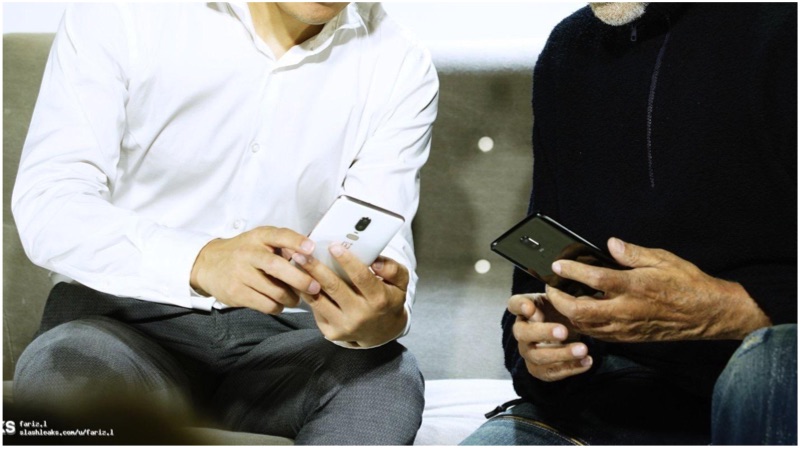 The OnePlus 5 was launched on the 20th June last year. Its successor, the OnePlus 5T was launched in November and the company was expected to follow the same launch pattern for its 2018 lineup as well. However, OnePlus 6 will launch on May 16th, more than a month before it was anticipated. With the launch a few days away, an interesting image of the OnePlus 6 has been leaked, revealing both the colour variants of the device.

Pete Lau, co-founder of OnePlus and Amitabh Bachchan, the brand ambassador of OnePlus in India were seen talking about the OnePlus 6 as someone clicked a photo of the two. Pete Lau is holding a white OnePlus 6 while Mr Bachchan has the black colour variant. It is hard to recognise where the photo was taken but. But, the image was posted to Twitter by Mr Bachchan himself and has deleted the images after arguably leaking the OnePlus 6. Only the back of the smartphone is visible in the image, revealing the dual-camera setup and the fingerprint sensor. The shape 0f the fingerprint sensor is different from the one found on the OnePlus 5T. One thing missing is a heart rate sensor which was officially teased on the company’s official Weibo account.

Our sources have revealed that the OnePlus 6 will be priced at Rs 34999 for the base model with 6GB of RAM and 64GB onboard storage. According to a listing on TENNA, the OnePlus 6 will have a 6.28 inch Super AMOLED display with a 2280 x 1080 px resolution. This translates into a 19:9 aspect ratio and the phone will shift to a conventional 18:9 aspect ratio if a user decides to hide the notch.

The OnePlus 6 is just a few days away from its official unveiling. However, there doesn’t seem to be a lot about the device that is unknown. Pricing could be the only thing that OnePlus might surprise everyone with.