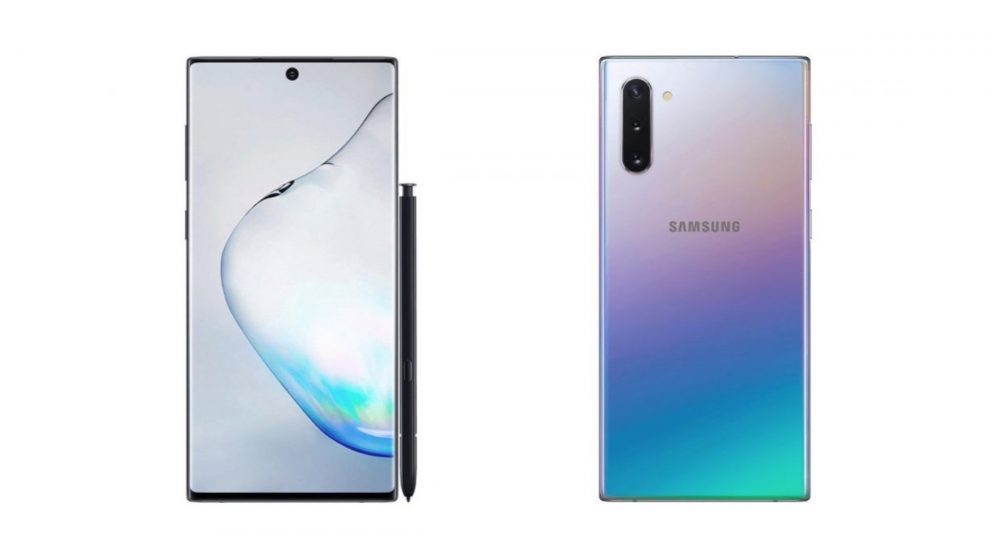 Samsung’s highly awaited Galaxy Note series’ latest iteration, the alleged Galaxy Note 10 has made many rounds on the internet. Various leaks, rumours and renders have already given us an idea as to what it would look like. The South Korean company is all set to unveil its latest flagship series next month during its Galaxy Unpacked 2019 event on August 7th. Now, the Samsung Galaxy Note 10+ has it’s colour variants and official press renders leaked. According to the images, the Samsung Galaxy Note 10+ will arrive in two colours. The first is a Silver Prism with a Blue S Pen accessory and the second is black with a black coloured S Pen. It will sport the Dynamic AMOLED screen with negligible bezels on every corner of the front panel. On the back, no physical fingerprint scanner can be discerned which means an in display scanners like the Galaxy S10 and Galaxy S10+ is to be expected. The Galaxy Note 10+ has a quad camera setup with a 3D ToF sensor and an LED flash flanking the right of the main camera module. Samsung’s logo is present on the gradient back and the company might finally be skipping the button dedicated for the Bixby digital voice assistant. The leaked specifications of the Samsung’s Galaxy Note 10+ reveal that it will feature a 6.75 inch QHD+ display with support for HDR10+ playback. Its front facing camera will reportedly be a 10MP sensor with dual pixel PDAF, similar to the one found on the Galaxy S10 lineup; the rear cameras will feature S10’s 12MP primary camera or a 48MP sensor accompanied by a telephoto and wide angles lens. The Galaxy Note 10 is likely to run on the Qualcomm Snapdragon 855 or Exynos 9825 SoC depending on the country the device will be available to purchase in. The smartphone will run on the latest Android 9 Pie with the company’s OneUI on top. It is expected to have up to 12GB of RAM and up to 1TB of internal storage as well. Similar to the Galaxy S10 series, stereo speakers can be assumed along with the usual connectivity options, but the headphone jack’ presence is unclear. Samsung’s upcoming device would presumably also ship with IP68 water and dust resistance rating. The Galaxy Note 10 is claimed to be powered by a 4500mAh battery with 25W fast charging capabilities. The competition is heating up with major OEMs are readying with their respective launches. Apple, Google and Samsung are one of the most renowned brands out there and the next couple of months is expected to be dominated by their launches. The latter with its Galaxy Note 10 series will have to pull an amazing feature or trick to arrive out on top of this arms race. More updates will be provided in the arriving week, stay tuned.