Ever since the inception of multimedia enabled phones, one question that has bothered the users is the storage space of these devices. Listening to the complaints, many companies have added the expandable storage feature, which is without a doubt, one of the most important feature of the phones. With the companies providing easy accessibility in terms of storing data as well as installing app data on the SD card, some of those issues are addressed. But what about devices which only have limited storage options like the blockbuster MOTO G which only comes in an 8 or 16 GB option. And what if you are a multimedia hoarder and even with expandable memory, you are not satisfied with the storage space. Here the SanDisk Ultra 16GB Micro USB 2.0 OTG Pen Drive

will come for your rescue. The Sandisk On-The-Go Pendrive is a tiny dual sided flash drive that comes with a USB 2.0 jack on one end and a micro USB slot on the other end. It is available in 16,32 and 64 GB variants starting at Rs. 629. The drive attaches to your OTG enabled phones and is recognized easily on the phones we tested the drive on.

On the design front, this drive has a protective casing for both USB ends. The casing clicks when it completely covers the USB to secure the ends. But while dropping it head on to the ground for testing we found that the micro USB side would slide back on impact, exposing the head, which is a bit of a worry. The micro USB end is also a bit tiny so you may have to take off the protective casing on your phone to connect the device. The middle portion with is sturdy and easy to hold. 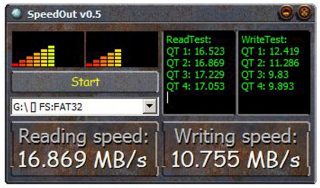 The drive’s read and write performance though are not satisfactory. In our test we found the reading speed was 16.86 MB/s whereas the writing speed was 10.75 MB/s, which is almost a third of the USB 2.0 speeds. But with the convenience it offers, some may overlook the low transfer speeds.

SanDisk provides a downloadable app, Memory Zone. This sleek looking app has a user friendly interface and allows you to password-protect your content. It also lets you sync your data with cloud storage options like Dropbox, Google Drive or Box.

Overall the tiny, one of a kind device is functional with some  flaws. Considering its price and what it offers it can also be considered a value for money. Sandisk needs to work on the speeds of the device, immediately and make the casings better so they don’t expose the Micro-USB end.

likethis
What's your reaction?
Awesome
0%
Epic
0%
Like
0%
I Want This
0%
Meh
0%
Posted In
Gadget, iGyaan, Latest, Multimedia and Storage, Review
Tags
usb
usb
About The Author

Happy Nagashetti
iGyaan Network's newbie Happy is a Technological Hedonist, Traveller, Photographer, Curious Humanoid and a giant foodie who is always pumped up for new adventures.
You Might Also Like
GadgetiGyaanLatestMultimedia and Storage
Read More