At first glance, the Sony Xperia L is quite reminiscent of the Xperia Arc, with it’s arched back and a large screen towards the front.

A noticeably plastic finish greets you when you pick up the handset, but it feels sturdy and there was little flex in the body – meaning the Xperia L doesn’t feel too cheap. The removable back cover has a soft rubber finish which makes the phone easy to grip and free from finger prints. On the contrary, the front panel is a magnet for fingerprints. 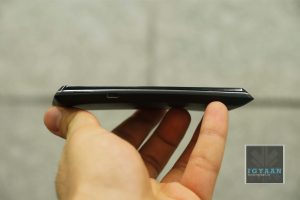 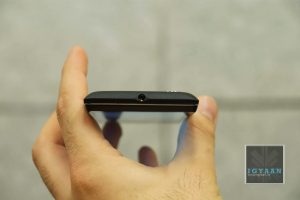 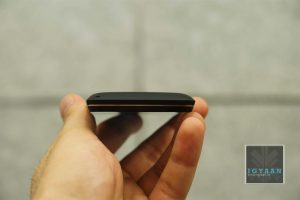 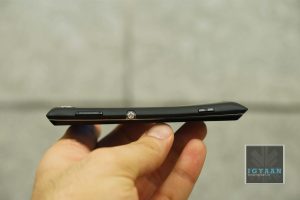 All of the Sony Xperia L ‘s buttons are on the right side of the device. The volume rocker is at the very top, while the power button (the same distinctive power/lock key found on various other Xperia devices) is lower down, almost in the middle of the device. Down at the bottom of the device is the hardware camera button. There is a micro-USB port on the left while the headphone jack sits square in the middle of the top of the device. At the bottom there is that famous light that glows beneath the display, letting the user know if they had any notifications waiting.

Overall, we were really impressed with the build quality of the device.

On the specifications front, Sony Xperia L sports a 4.3-inch display with 480×854 pixel resolution and is powered by a 1GHz Qualcomm MSM8230 dual-core processor. It runs on Android 4.1.2 Jelly Bean operating system and packs 1GB RAM along with 8GB of internal storage which is expandable up to 32GB via microSD card.

The handset supports WIFI, DLNA, 3G, GPS and Micro-USB and packs 1750mAh battery gives up to eight and a half hours of talktime and standby time of up to 498 hours. The device comes equipped with an 8-megapixel front camera with Exmor RS and a VGA front facing camera.

The front of the Xperia L is dominated by its 4.3-inch FWVGA display with the standard Android keys appearing onscreen instead of below it. Again, its 854×480 resolution is pretty standard for a phone at this price, and you have to zoom in to read text on web pages, but we saw bright whites and punchy colours. The Xperia L’s LCD display doesn’t have the true blacks of an AMOLED screen, but blacks are still very deep. It’s a high-quality display for a relatively inexpensive handset. Viewing angles are really decent as well.

Sound quality on the Sony Xperia L is excellent, loud and clear. Couple that with it’s display quality and you have a really capable multimedia device in front of you. On-screen buttons disappear while you watch videos freeing all the screen space for your viewing pleasure.

One area where the Sony Xperia L disappoints though is the browsing experience. We tried various browsers and performance on each was equally dismal. Pages took a lot of time load up and there was a lot of lag while zooming and scrolling.

Gaming on this device is excellent, and while games like N.O.V.A and Fifa 12 were not compatible with the device, it delivered the ones that were excellently. One of the benefits of having a large sensor is low light performance and the Xperia L takes some of the best low-light photos we’ve seen in the segment. Outdoor images though were just about decent with slightly washed out colours. Looking at fine detail you’d often notice images turn out soft and spongy. 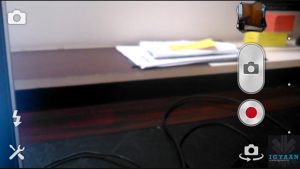 The camera experience is somewhat hampered by the slow and buggy camera app. Focusing takes a lot of time and the app takes a moment or two to process the image, resulting in blurry motion shots. The 720p video capture suffers from the some of the same issues, although not quite as much as still photos do. The auto-brightness is very aggressive, so expect some very noticeable shifting in your brightness, especially if the subject is backlit.

With a 1 Ghz dual-core Qualcomm Snapdragon S4 chipset, Adreno 305 GPU and 1 GB of RAM, the hardware inside the Sony Xperia L is nothing we haven’t seen before, so we had a fairly good idea of what to expect.

The Sony Xperia L scored 10104 in AnTuTu Benchmark, 60.2 fps in NenaMark2 and 4064 in Quadrant. Impressive for the hardware the device is powered by. Sony has applied its own layer of gloss to Jelly Bean, with its a homescreen editor function allowing you to quickly and easily manage your widgets, apps and shortcuts as well as changing the phone’s theme and wallpaper – making it that bit more personal. Lovely.

Sony has given greater presence to its own services like the great WALKMAN app but also to more clunky offerings like the Sony Select application.

Onboard Sony firmware clearly has an impact on the advertised 8GB of internal storage which is 5.8GB.

The phone networks are consistent and of good strength, no issues with connectivity to data and voice services. Overall network performance is impressive and voice handling good thanks to decent microphones and speakers in the Sony Xperia L .The dialler has also been tweaked by Sony. Messaging was decent as well due to the large screen and the well laid keyboard.

Generally the Sony Xperia L copes with everything pretty well and while there is a hint of slow down every now and then that’s expected from cheaper handsets. What should help it stand out in its fairly crowded category are its looks and design.