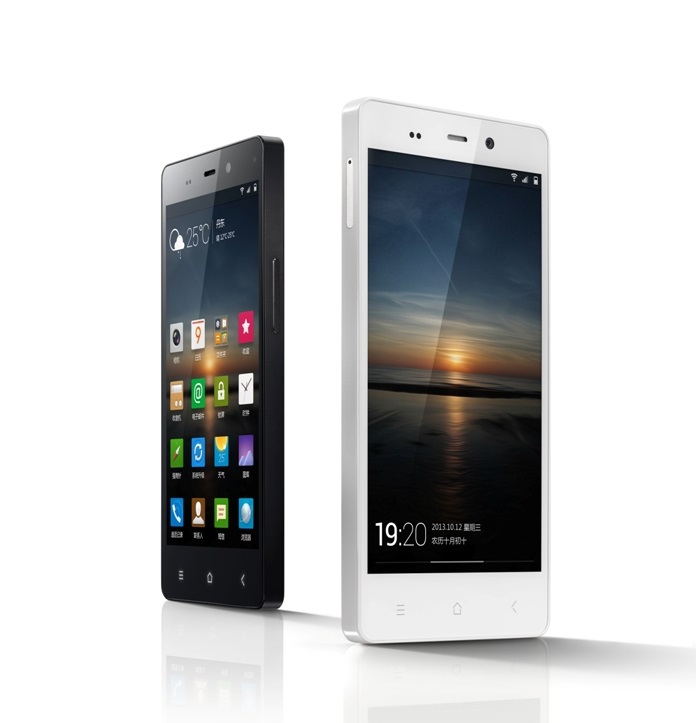 Gionee has launched its flagship smartphone today, the Gionee Elife E6 which was announced earlier in the month of July and since then it was one of the much awaited smartphone. The device is officially launched in India today with a price tag of 22,999 INR.

Gionee Elife E6 is powered by a 1.5GHz quad-core ARM Cortex A7 CPU and a PowerVR SGX544MP GPU. The device has a 5 inch AMOLED display with full HD screen along with a resolution of 1080 x 1920 pixels. The screen has a 441 ppi with the OGS technology.

The Gionee Elife E6 comes with a 13 MP rear camera with a second generation BSI sensor and a 5 MP front-facing camera with a 28 mm lens. Both cameras support full HD recording. The device is powered by a 2020 mAh battery and runs on Android 4.2 Jelly Bean. The device sports 2 GB of RAM along with 32 GB of inbuilt storage which is not expandable as the device has a unibody construction. The device also features gesture controls, which allow users to answer phones by directly raising the device up to their ears, answer calls by sweeping a hand over the screen, change the pictures in the gallery by a sweeping motion, and automatically play/pause videos when the user looks away from the screen. While you wait for our unboxing and Full review which is coming soon, you can watch our hands on video with the Gionee Elife E6:

New Delhi, October 3, 2013: Gionee Smartphone following the grand success of its ELIFE Series in India, announced the arrival of World’s First White OGS smartphone ELIFE E6. The latest in the ELIFE series, the E6 is a stunning example of exquisite style and exemplary substance.

The Unibody Elife E6 is powered with a lightning fast 1.5 GHz Quad Core Processor which enables high performance as well as high efficiency at low power consumption. With a stunning 5.0” FHD LTPS Screen at 441 PPi with Gorilla glass class 3, this piece of art provides excellent screen clarity along with super smooth multi– touch interface with an Android Jelly Bean v4.2 with Amigo Interface

Arvind R Vohra, Director, Syntech Technology Pvt. Ltd said “It gives us immense pleasure to bring the much awaited Elife E6 to India. We believe that life as it is very complicated, but your technology used doesn’t have to be so and thus we created <Do More with Less>”. E6 purely by the virtue of its design, performance and features like Guest Mode, Ignore incoming call without disconnecting call, Live Weather, Smart Gesture, motion sensing dialing, are sure to create a new benchmark in Indian smartphone market.

With an in-built Digital Theatre System (DTS) and Amigo professional Music player, E6 is sure to deliver breathtaking multimedia experience. Elife E6, the Unibody phone comes with 2 GB RAM & an in-built memory of 32 GB which provides plenty of space to install apps and save music and video files. The Gionee smartphone comes with apps including We Chat, NQ, UC Browser, Gionee game Zone, Gionee Xtender, Face book, You Tube, SAAVN, Twitter amongst others.

Elife E6 is powered with a 2000 mAh battery to provide a long lasting standby time along with the most Intelligent power control system – Heartbeat Synchronizing which enables the system to synchronize the wake up applications thus running the ensuring the high efficiency of processor with low power consumption.

Elife E6 offers its users an option of simple life with simple technology that gives Balance of performance and convenience. The stylish Elife E6 will be available in Pearl white and Stunning Black.

We plan to back the E6 with a 360 degree marketing campaign starting in the first forth night of October to create the required awareness for E6 and build Brand Gionee in India. We have earmarked US$ 2.5 Million spent for the current festive season Vohra said.

The ELIFE E6 will be available at a market operating price of INR 22,999