The new browser lets users add iOS like web shortcuts to the home screen, will now open in a full-screen experience and appear as a separate app in the app switcher. With the Beta release of Chrome for Android, it’s now easier to create shortcuts on the homescreen which open the website that you often go to.

When visiting a website you would like to save, user will have to simply select “Add to homescreen” from the toolbar menu. The new version 31 also brings the desktop client’s search focused tab. Google has even provided search speed boost through server-side code. The new update, Google have also made it work for web payments. On sites with request Autocomplete(), users will be able to either use their existing payment data stored with the browser or enter new details through a browser-provided interface.

While, Google says that this feature will be rolling out to Beta users in Android, Windows, and Chrome OS in the coming days. A Mac version will be included in a future release. Whereas, Google also shared that with all these new updates they promise much faster browsing experience on mobile phones. Google’s Developer Advocate, Ilya Grigorik said in a post:

Google mobile search is getting faster – to be exact, 200-400 milliseconds faster! We are gradually rolling out this improvement to all browsers that support the <a ping> attribute (currently, mobile Chrome and Safari).

What’s the benefit? Whenever the user clicks on a result, typically they are first sent to a Google URL redirector and then to the target site. With <a ping>, the click is tracked using an asynchronous call, meaning that the user sees one less redirect and a faster overall experience! 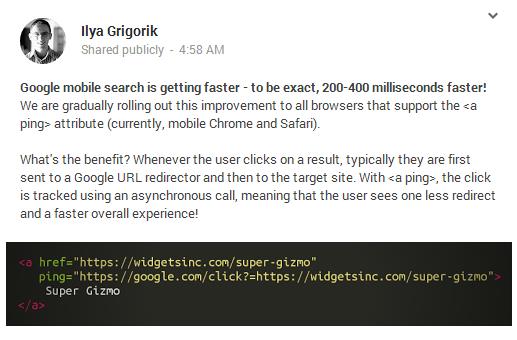