AppGyaan: Top Apps of the Week Part 1: LinkedIn and Wheres My Droid

by Bharat NagpalApril 17, 2011
1
Now Reading
AppGyaan: Top Apps of the Week Part 1: LinkedIn and Wheres My Droid
Browse This Page A Weekly dose of what we think are the top apps of this week. LinkedIn is possibly the only social network for professionals, which has become popular all across the globe. Although the app for mobile platforms on iOS and Blackberry existed for some time the app was recently announced for the Android Platform. We reviewed the App and found it to be a perfect portable companion to the full desktop version of the app.

The app has six modules  to view updates from your professional network, updates from newly established connections, changes to people’s profiles, and articles and information being shared by your contacts.

Something new to the application is the sharing aspect where now you can share news and information across facebook and twitter. it also allows you to share information among your contacts, making the network aspect of LinkedIn stronger.

You can also access the profiles of your connections and send them messages and invites. Messaging is an integral part of the network and is now fully featured in the app. You can also, read and respond to messages and invites directly from your mobile phone. Another new feature of the app is the” people you may know ” section which allows you to search for your contacts and aconnections easily suggesting the people through the search criteria and already existing connections.

Overall the app provides good interaction with the network, leaving little or no features compared to the desktop mode, we also like the module look which makes navigating through the app fairly simple. Some people also reported crashing and the app not working on some devices. We also faced issues on our Desire HD which was resolved after reinstalling the App. 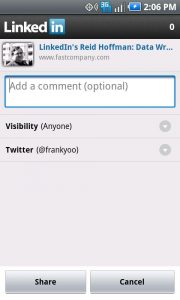 Not everyone can afford an iPhone or an HTC phone, that come with an added feature of geo-locating  the device. Also making a device ring even though its in silent mode should be easier than just logging on to the internet and opening websites and whatnot. This is where “Wheres my Droid” comes in. a free and novel app that allows users to find their phone by simply making it ring at full volume.

“How do you make it ring?” you ask. Well just use any other cellphone around you and sms a pre-defined passcode message to your device. The message with the passcode will trigger the app which in turn will trigger the phones ringer to ing at full volumes. a fairly simple idea which well “WORKS”. The app also gives the users ability to customize the passcode to one that you remember.

Now the feature that was most interesting to us was the fact that you can also find the location of the device using this app. Using a different GPS only  passcode you can ping the device to send you back an SMS with the location based in google maps. This feature works brilliantly if you have a smartphone which has google maps installed(mostly all smart-phones have Google MAPS). we tested it out and it worked brilliantly between our iPhone and our “lost Desire S” 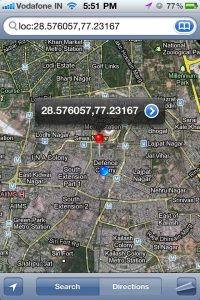 Bharat Nagpal
Founder and Chief Editor of iGyaan. Bharat likes to keep on top of technology ! Follow Him on Google Plus : Google+
You Might Also Like
AppleApps and SoftwareHTCiGyaan
Read More