XOLO off late has added some rather interesting products to its catalogue in the overflowing lower mid-range category of smartphones. The company recently launched the Play series, along with adding a Windows Phone to its product catalog.

The Indian manufacturer has now added a pair of sub Rs. 10,000 devices under the new XOLO Omega range, the XOLO Omega 5.0 and the Omega 5.5. Given the price, they offer a fairly solid set of specifications. We assess if the Omega range take on the likes of Xiaomi, who have notably made a dent in the market with their aggressive pricing. It’s all about flagship killers these days, though can XOLO have a Xiaomi-killer in the making?

The one with us is the Omega 5.0 which is the smaller of the two, with main differences primarily being screen size, camera resolution and battery capacity. The XOLO Omega 5.0 packs in a decent set of specs, but with the competition in budget category booming, can the smartphone leave its mark in the market, let’s find out! As already mentioned, the XOLO Omega 5.0 does come with a fairly decent set of specs. Notably, it comes quite close to the Xiaomi Redmi Note. Check out the key specs below:

At first glance, the XOLO Omega 5.0 looks like a well-made smartphone, though nothing out of the ordinary when it comes to design. It has a pretty bland look, with a black plastic finishing coupled with a metallic silver trim running along the edges. We have the power and the volume rocker keys housed within these metallic strips, with the power button on the right and the volume rockers on the left. The bottom of the device is empty as both the micro-USB port and 3.5 mm headset jacks are housed on top. Meanwhile, the three capacitive physical buttons are located below the display, which are not backlit but would suffice in low light conditions as the icons are shiny enough. 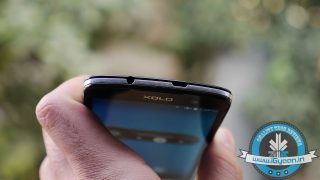 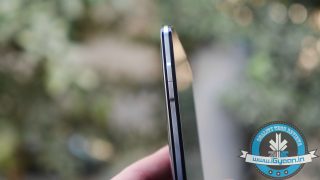 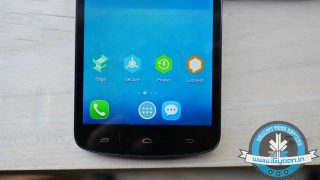 The back of the phone is made out of a smooth glossy plastic, apparently making it a fingerprint magnet. The primary camera unit is housed at the back with the XOLO logo housed right below the camera unit. The rear speaker cutout is made almost at the bottom. 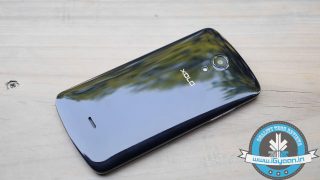 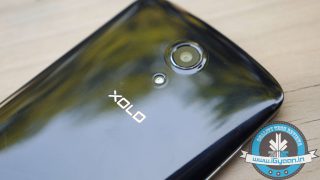 Removing the back panel is relatively easy, which reveals the two SIM card slots along with the microSD slots, though you cannot mess around with the battery unit.

All in all, the Omega 5.0 is quite convenient for one-handed usage. The curved back does enhance the overall grip on the phone, though lacks the looks which forms one of the perennial elements of a smartphone.

The XOLO Omega 5.0 runs on the Android 4.4 KitKat OS with XOLO’s proprietary UI Hive on top. The HIVE UI has more of a streamlined and minimalistic approach to the stock Android, making it perfectly in tune with Google’s new material design.

The first thing we noticed was the lock screen, which has quite an interesting take on jumping onto specific apps directly from the lock screen. It allows users to jump directly into the most used apps directly, which is quite a nifty feature. The second major difference being how all apps are housed; they are arranged chronologically in three different ways – alphabetical, recently used and categorically. Along with that there are a few interesting improvements. For instance, the contacts application now features block colours and rounded icons; an aesthetically pleasing choice. In addition, the toggle menu has been given a new look as brightness and volume options now get a jog-dial system of adjusting them. Unlike the line bar style found in almost all other UI’s. In addition, there are some nifty power saving modes and CPU information which seems rather useful. Overall, the UI appears rather pleasing and is minimalistic; HIVE certainly has the potential around which future smartphones’ user interface will be based on. One of the snappier and user-friendly interfaces’ we’ve come across in a long time.

The smartphone features a 5-inch screen with a pixel resolution of 1280x720p, which has a pixel density of 294ppi. Hence, it makes for great readability with larger and broader texts. Even viewing angles are fairly good, presence of an IPS on-board panel is clearly evident. The XOLO Omega 5.0 sports an 8MP AF primary camera with Exmor R sensor along with a 2MP front-facing camera. The primary camera unit can take fairly good quality pictures with good detailing and colour reproduction. Daylight images are rather more than satisfactory though one might have trouble at night. Meanwhile, the camera app comes preloaded with an array of  shooting modes including HDR, Panorama, Gesture Shot to name a few. Also included in the camera widget are some preloaded effects like Mono, Sepia, Aqua, Blackboard etc. Overall, the camera performance is rather pleasing, especially when taking macro shots. The rear camera is also able to take Full HD videos at 30 fps, and the video recording quality is fairly decent given the price range. While the front snapper isn’t all that amazing, but it should suffice your selfie needs.

The scores indeed translate into its real-time performance as it can handle multitasking and normal daily usage without any hassles. Popular gaming titles like Subway Surfer and Temple Run run flawlessly though one might experience a few lags on cranked up settings playing high-end titles like Asphalt. However, it’s still a delightful experience and those slight hiccups do not alter the overall experience of the game.

The phone’s signal quality is rather good indoors as well as outdoors, while audio on call is pretty crisp and clear on incoming as well as outgoing calls. Meanwhile, Wi-Fi connectivity is quite strong, it detects and latches onto networks within range at ease, thanks to the plastic body which significantly improves Wi-Fi connectivity.

Meanwhile, battery life should suffice for one whole day of usage with the included 2100mAh battery, which is quite standard in this price bracket. Even for a heavy user, the battery should make it through the day without the need for constant charging.

Given the price, the XOLO Omega 5.0 is a rather solid entry level performer and at the same time is easily available. While it might not appear at par with the competition in terms of its outer demeanor, it overthrows that by what it has on its inside. With an octa-core chipset and 1 GB of RAM, along with a fairly impressive 8 MP camera, it does what you would demand from a smartphone, that too at relatively attractive price point. In addition, the company has also promised the Lollipop update.

XOLO Omega 5.0 is a step in the right direction for domestic manufacturers, especially when companies like Xiaomi and Motorola are constantly giving them a hard time. Put simply, the XOLO Omega 5.0 is a great buy, though you have other options like the Redmi Note and the Omega 5.5, if you’re willing to sacrifice a bit on portability.

likethis
What's your reaction?
Awesome
0%
Epic
0%
Like
100%
I Want This
0%
Meh
0%
Posted In
Latest, Review
Tags
Xolo
Xolo
About The Author