The Nintendo Wii U, the Next Gaming Revolution! (PR)

by Bharat NagpalJune 8, 2011
0
Now Reading
The Nintendo Wii U, the Next Gaming Revolution! (PR)
Browse This Page 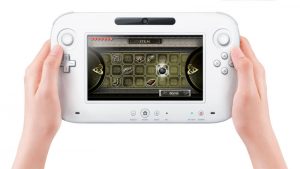 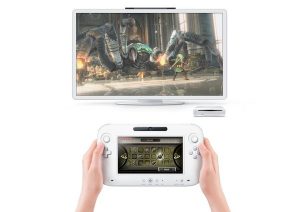 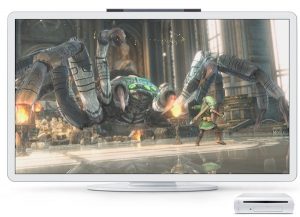 Nintendo has just announced the Wii U, its the next generation of gaming console coming in 2012. There is a whole new controller with a 6.2 inch touchscreen that lets you not only interact with the game while you play it on your TV, but lets you play the game on the controller when the TV is not available. All the existing Wii accessories and games,softwares will work with the new Wii U.

The Wii U will also have a dedicated graphics processor, which will play all sorts of Heavy graphic games that the Game Devs can throw at it.

The new Wii also supports full HD 1080p over your HDMI cable. The standard s-video and component connections remain, there is also a small internal memory along with 4 USB ports and a standard high density optical drive reader.

Nintendo 3DS Continues its Evolution with Mario Kart, Super Mario and the Nintendo eShop as Nintendo Celebrates the 25th Anniversary of The Legend of Zelda

LOS ANGELES–(BUSINESS WIRE)–At the E3 Expo, Nintendo introduced a new paradigm for video games and home entertainment: Wii U™, a new console that includes a controller with a 6.2-inch screen. Adding a second screen to the living room creates a multitude of new video game experiences while offering families a variety of options to customize their entertainment.

“Wii U redefines the structure of home entertainment by fundamentally changing how the TV, the game console and the Internet function and interact together”

Previously, video games played on a home console have been confined to the TV and offered identical viewpoints to each player in a multiplayer environment. Furthermore, watching TV and playing console games have been completely separate experiences. The new controller removes these boundaries, creating a more dynamic and fluid gaming and entertainment experience. Visitors to the E3 Expo will see firsthand the type of gaming experiences made possible by Wii U and the new controller such as:

In addition to the 6.2-inch screen, the new controller also features an accelerometer and a gyroscope, a rumble feature, an inward-facing camera, a microphone and speakers. Adding these features to the Classic Controller™ button scheme – two analog Circle Pads, +Control Pad, A/B/X/Y buttons, L/R buttons and ZL/ZR buttons – will enable a breadth of game-play experiences while appealing to both casual and dedicated video game players.

Wii U combines motion-sensing game play with the ability to support full HD graphics. Each Wii U console will be partnered with a new controller and can also use up to four additional Wii Remote™ or Wii Remote Plus controllers. The system is also backward compatible and can play all Wii games and use all Wii accessories. The Wii console has sold more than 86 million units globally and greatly expanded the overall audience for video games. Wii U aims to expand that audience even further. Developers worldwide are already working on new games and experiences for the console.

“Wii U redefines the structure of home entertainment by fundamentally changing how the TV, the game console and the Internet function and interact together,” said Nintendo President Satoru Iwata. “The experience enabled by Wii U and the new controller takes players deeper into their games, while reaching out wider than ever before to be inviting to all kinds of gamers.”

Nintendo 3DS™, which lets users see 3D images without the need for special glasses, launched in the United States on March 27 and continues to evolve. Owners will find that their Nintendo 3DS experience is different every time they pick up the system, thanks to new content and updates delivered by Nintendo, by third parties and exchanged between users.

A new system update is now available for the Nintendo 3DS system. Users who connect to a wireless broadband Internet connection and install the system update will instantly gain access to the Nintendo eShop, which contains a variety of games and applications for download using a cash-based system.

The system update also provides Nintendo 3DS owners access to free items, including an Internet browser that can show 3D images on sites specifically designed to show 3D images, a download of a re-mastered 3D version of the NES™ classic Excitebike™ game (free until July 7) and Pokédex™ 3D, which lets users discover and view more than 150 Pokémon™ from the Pokémon Black Version and Pokémon White Version games in visually engaging 3D.

Nintendo also announced a huge lineup of upcoming new and fan-favorite franchise games, many of which are playable on the E3 Expo show floor in booth 4922.

For the duration of the E3 Expo, Nintendo will provide fans with exclusive videos and Nintendo content on the Nintendo Network. People can visit http://e3.nintendo.com to watch developer interviews, get all the information about new games and see coverage coming directly from the show floor. The same exclusive content also will be streamed through the Nintendo® Channel to Wii owners who have a broadband Internet connection.

About Nintendo: The worldwide pioneer in the creation of interactive entertainment, Nintendo Co., Ltd., of Kyoto, Japan, manufactures and markets hardware and software for its Wii™ home console, Nintendo 3DS™ and Nintendo DS™ family of portable systems. Since 1983, when it launched the Nintendo Entertainment System™, Nintendo has sold more than 3.7 billion video games and more than 600 million hardware units globally, including the current-generation Wii, Nintendo 3DS, Nintendo DS, Nintendo DSi™ and Nintendo DSi XL™, as well as the Game Boy™, Game Boy Advance, Super NES™, Nintendo 64™ and Nintendo GameCube™ systems. It has also created industry icons that have become well-known, household names such as Mario™, Donkey Kong™, Metroid™, Zelda™ and Pokémon™. A wholly owned subsidiary, Nintendo of America Inc., based in Redmond, Wash., serves as headquarters for Nintendo’s operations in the Western Hemisphere. For more information about Nintendo, please visit the company’s website at http://www.nintendo.com.

Note to editors: Through July 7, Nintendo press materials for the E3 Expo are available at http://press.nintendo.com/e32011. The username is E32011 and the password is nintendo. To obtain a permanent login, please contact Deanna Talamantez at 213-438-8742 or [email protected] Users can receive instant Nintendo information by subscribing to the site’s RSS feed. B-roll is available at http://www.thenewsmarket.com/Nintendo.

Bharat Nagpal
Founder and Chief Editor of iGyaan. Bharat likes to keep on top of technology ! Follow Him on Google Plus : Google+
You Might Also Like
Games and GamingLatestTech
Read More