The Spice Popkorn is the first phone in India to have a built in projector and as such sets the standard for all future devices with this technology. Lets find out how it fared at the iGyaan Lab.

The Popkorn has a standard candybar design that is much thicker than a regular candybar phone due to the inbuilt projector. It feels quite solid and is comfortable to hold with its metal and rubberized plastic body. The phone weighs 123g and is quite a bit heavier than phones of a similar design, but due to its form factor, it still feels quite comfortable in the pocket.

One feature that we thought was a little delicate was the telescopic antenna. Its quite thin and fells like it will bend if a little too much pressure is applied. Be careful when expanding and retracting the antenna as you use this device.

The screen on the Popkorn is a 6cm 320x240px QVGA display which is quite vivid and displays good contrast in colours. Its nothing to boast about, but then its not the only display the phone has. The device has Dual SIM capabilities and supports GPRS and WAP connectivity. It also has built in bluetooth to allow you to connect your phone to a bluetooth device. It does not support 3G or WiFi.

The phone comes with a tripod and a tripod mount. We felt that the quality of the tripod could be improved as  it feels like it might tip over with the weight of the phone, but such is not the case. The tripod mount holds the phone securely and keeps it nicely balanced on top of the tripod.

Overall, the build quality of this device is exceptional, when you consider the fact that Spice has managed to stuff a projector into a device that weighs only 123g. The Popkorn has a 3.2MP rear facing fixed focus camera that can capture images upto 2048 x 1536 px. It can also record video at a maximum of 15fps and also comes with a 4x digital zoom.The camera can be used as a webcam as well, once you plug it into your computer via the included USB cable.

The projector on the device, in our tests, has given a readable display of approximately 40 inches at its largest and 2″ at the smallest. That’s a HUGE screen from a tiny device. We recommend that the phone be setup so that the display is approximately 27″ to 30″ large as this gives the best picture quality. However, the projector is not extremely bright so using it in a well lit room is not advisable. Keep the lights off and the curtains drawn when using the projector. With many air vents around the phone, we did not notice any significant heating of the device, even after extensive use of the projector.

Another great use of the projector is to watch TV. The Popkorn catches analog TV signals from its telescopic antenna. Channels can be programmed and saved to the device so that you can view them at your leisure. While watching TV is a nice recreational activity, the phone also has a feature that can come in handy while at work. It has the ability to playback PowerPoint Presentations, and with the included laser pointer, you can make excellent professional presentations. You no longer need to carry your laptop to your meetings. Simply copy your ppt onto the memory card and carry the phone. 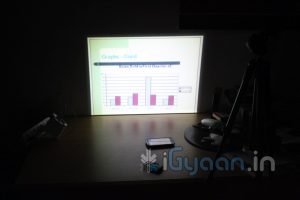 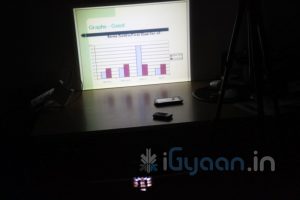 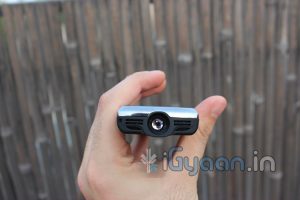 The phone also has built a built in FM radio, and with the telescopic antenna, you do not require headphones to catch a signal. It also has the ability to schedule and record FM radio so you can catch all your shows at your pleasure. The speaker phone is very loud and gives sufficient sound to be clearly heard in a large room. Spice has also included an external speaker which increases the audio output of the device many-fold. The speaker also has a built-in battery so it does not drain the battery on the phone while in use. A few cables have been included to connect as well as charge the speaker.

The Popkorn supports Dual SIM cards. It also has a standard numpad which makes dialing and placing calls a breeze. The microphone and earpiece perform as expected and we have no complaints. As stated, the loudspeaker is really loud and provides a good hands free experience.

Typing on the phone is also easy as the keypad is quite responsive and the keys are easy to press.

The Popkorn supports GPRS and WAP. It has a browser that leaves a lot to be desired. One feature we found lacking was WiFI. It would have been great if we could use WiFi to browse the internet on the projector or even stream videos directly to the device via our desktops/laptops. Maybe they will include this feature in the next version of the device.

When we got this device, we had low expectations of its performance. However, after using it for a while, we were, quite literally, blown away. The phone by itself is comparable to any number of Dual SIM phones that are on the market today, but the other features that it packs set it a world apart. The Projector with its Video playback, Analog TV and Presentation capabilities left us in awe. For its price, it is possibly the most inexpensive projector on the market today. The fact that its a phone and can fit in your pocket just adds icing to the cake. Anand Kapre
A gaming freak, A Computer geek and an important role player at iGyaan.in . He also is a maniac cook( loves his grill) and the founder of minecraft.co.in. Anand is dedicated to testing the devices to their core and finding the useful from the lifeless.
You Might Also Like
GadgetiGyaanLatestMobile
Read More