The 2012 CRV is a no brainer, the anticipated SUV has been a little bit of disappointing in India for the past couple of years. With a a slightly revamped exterior that looks like the prime finish on a Mahindra XUV 500 (especially in the Rear).

Honda’s  2.4-liver i-VTEC four-cylinder powers this not-so badboy, with 185 horsepower and 163 pound-feet of torque. The transmission is still the old one from the existing one, poor old dying gearbox. The company did not make major changes to the design or the technology behind the vehicle.

New Age features in the 2012 CR-V will include standard Bluetooth HandsFreeLink, a multi-angle rearview camera and a full-color information display. The CR-V will also receive SMS text messaging capability, which reads incoming text messages over the audio system.

The new CRV is expected to Hit India sometime in Q2 2012, Pricing seems to be upwards of 25 Lac. 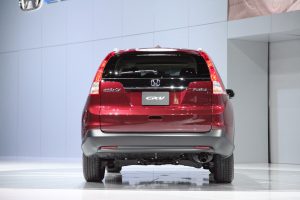 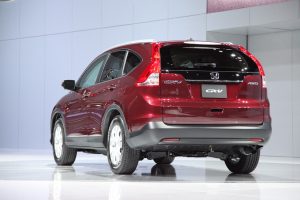 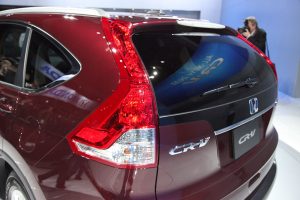 With the previous-generation CR-V recognized as a “Top Recommended Vehicle” and having the “Best Retained Value SUV under $25,000” by Edmunds.com, and named top compact crossover SUV in dependability by J.D. Power and Associates, the all-new 2012 model introduces the latest evolution of Honda’s successful CR-V formula. Compact on the outside and roomy inside, the CR-V represents an ideal balance for size and capability in the entry SUV segment. The all-new five-passenger CR-V offers improved car-like interior comfort, a smoother and quieter ride, and even more innovative features than the previous model.

Powerful and Efficient 4-Cylinder Engine
Leading the changes are a more efficient engine design with improved horsepower and torque, along with an all-new Real Time All-Wheel-Drive (AWD) with Intelligent Control System™. All CR-Vs are powered by a 2.4-liter i-VTEC 4-cylinder engine with 185 horsepower and 163 lb-ft. of torque paired with a standard 5-speed automatic transmission. EPA-estimated fuel economy is rated at 23/31/26 mpg city/highway/combined (FWD) (an increase of +2/+3/+2 mpg compared to the 2011 CR-V), and a compact SUV-class leading 22/30/25 mpg city/highway/combined (AWD) (an increase of +1/+3/+2 mpg compared to the 2011 CR-V). Eco Assist, a new feature on the CR-V for 2012, indicates to the driver when the vehicle is being operated in an efficient style via “green” visual cues surrounding the speedometer, and a selectable ECON Mode alters operating characteristics of the vehicle to support an efficient driving style.

New Standard Features
New for 2012 standard features include an Easy Fold-Down 60/40 Split Rear Seat and a range of standard technology features. New high-tech features on all models include a Bluetooth® HandsFreeLink® phone interface (previously an available feature), a full-color intelligent Multi-Information Display (i-MID) and a multi-angle rearview camera with guidelines. As a first for Honda, every 2012 CR-V includes an SMS text messaging function, which can read received texts from compatible cell phones aloud over the audio system. Another first is the introduction of a Pandora® Internet Radio interface , compatible with the Apple® iPhone®, which works with the vehicle’s audio controls and i-MID.

Design
The 2012 CR-V body adopts a more dynamic and sophisticated appearance compared to the previous generation. The CR V’s spacious interior layout is more accommodating with a roomy new center console (now standard) and an overall lower cargo floor height for easy loading and unloading. The new Easy Fold-Down 60/40 Split Rear Seat makes accessing the full capability of the cargo area much more convenient than traditional folding seats. Each side of the rear seat can fold nearly flat into the front of the cargo area using one of the release levers located near the tailgate, or a pull-strap positioned on the seat side.

Safety
Every CR-V incorporates as standard equipment VSA, an electronic stability control system; an Anti-lock Braking System (ABS) with Brake Assist; side-curtain airbags; front-side airbags with a passenger-side Occupant Position Detection System (OPDS); and a front seat design that can help reduce the severity of neck injury in the event of a rear collision. An Advanced Compatibility Engineering™ (ACE™) body structure in the front of the vehicle helps make the vehicle highly effective at absorbing and dispersing the energy of a frontal crash.