Since we already spoke about the use of plastics by Samsung, and their unwillingness to move to a different type of build for their most recent flagship the Galaxy S4. A lot of readers are confused about the one statement made by Samsung Executives who said, “The new Samsung Galaxy S4 comes with Polycarbonate Glaze”, in fact it appears Samsung’s use of the said statement has actually met with its purpose.

Lets lay down the details first, the Samsung Galaxy S4 is the Korean company’s latest flagship announced at an event held in New York on the 14th of March 2013. The smartphone just like any other from Samsung in the past and others this year, features top of the line specifications. The norm being full HD 1920 x 1080p display, a 13 MP camera, various storage capacities, an octa-core processor and a newer set of software tweaks to satisfy the user and to set them apart from others. The Samsung Galaxy S4 also has a large 2600 mAh battery and the very latest Android 4.2.2 with their new designed for life  TouchWiz/ Nature/ Life UI.

But one major element of the latest smartphone that seems to not be catching the fancy of the eye is the lack of design change and the continued use of plastics in the so called natural form factor. We do understand that most companies follow the “if it sells then why change it?” policy, But the reason Samsung came into the limelight is because they changed the norms, with the S2, with the Note series and even with their tablets to some extent, which were unique in their own way and different from the herd of smartphones that were being built on Android.

But, before we start another battle, lets talk about the “Polycarbonate Glaze”. Polycarbonate Glazing (confused here), is used to replace glass in areas where extra strength is required, like greenhouses, security cars, safe rooms and even on some fighter jets. However the thinnest form of this polycarbonate glazing which can be used effectively is either 4mm or 5mm, and since most of us know that the Samsung Galaxy S4 is just short of the 8 mm thickness, Samsung did not fill half of that bulk with a polycarbonate sheet. [pullquote_left] special poly-carbonate body [/pullquote_left]Polycarbonate Glaze, however, is what Samsung has actually done on this variant of the Galaxy, Glaze by definition of its use here is “a layer of paint, thinned with a medium, so as to become somewhat transparent” . The Samsung Galaxy S4 has a fully plastic shell/frame which does not use Polycarbonate anywhere. In-fact Samsung goes to say that the Galaxy S4’s bezel is wrapped in a “special polycarbonate body” which means that the plastic back panel has a coating of polycarbonate paint, generally used to provide added strength to RC boats, cars and toys. This particular “Polycarbonate Glaze” is also used on some other model novelty items to provide some added shine and strength.

In May 2012 Samsung responded to several users upset with the build quality of the galaxy S3, claiming that the back cover of the Galaxy S3 in-fact has polycarbonate, “Using three layers of high quality, pure and clear polycarbonate”, what they did not mention is that these three layers are by all intents and purposes laid on top (read: painted/coated) of the plastic back panel of the Galaxy S3, the Note 2 and in-fact the recently launched Galaxy Grand aswell. So, go ahead Grand owners celebrate your phone is made out of polycarbonate. The Lumia series of phones from Nokia, are the greatest example of the kind of feel a polycarbonate shell would give to the one holding it, some HTC phones also possess this type of build.

The fact remains Samsung may or may not change their design process, especially if they continue to sell the numbers they already do. We have reached out to Samsung for better clarification and will update this article, once they do respond.

Bharat Nagpal
Founder and Chief Editor of iGyaan. Bharat likes to keep on top of technology ! Follow Him on Google Plus : Google+
You Might Also Like
Ask iGyaaniGyaanLatestSamsung
Read More Ask iGyaan : What is ppi (pixels per inch) ?
Read More 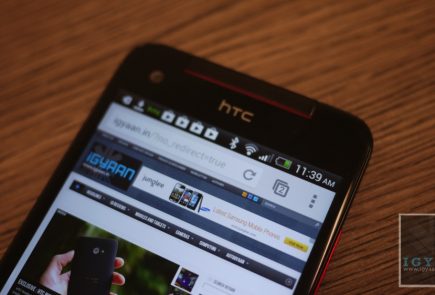