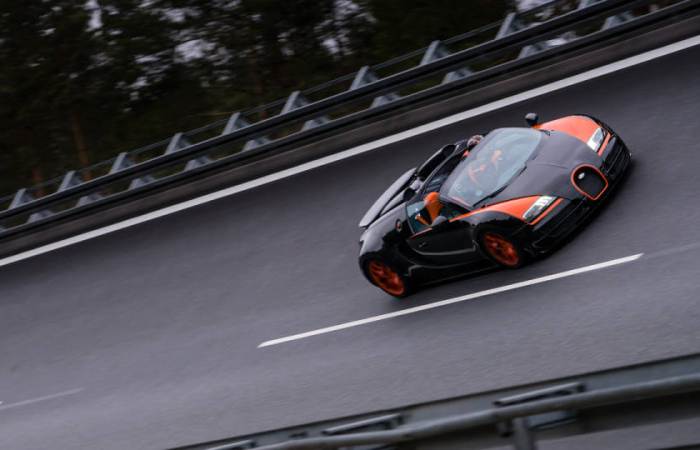 You win some, you lose some. The Bugatti Veyron Grand Sport Vitesse is now officially the world’s fastest drop-top, with a record speed of 254.04 mph (408.84 kmph). Remind yourself that this is a convertible, and that figure becomes more mind-numbing than ever.

The record was set at Volkswagen’s Ehra Lessien Test Track in Germany, which is one of the very few places on earth where a Veyron can be maxed out. Ironically, the run took place on the 6th of April 2013, the same day when the Bugatti Veyron Supersport was stripped of its fastest production car record by Guinness World Records.

The milestone will be celebrated with a limited run of 8 special ‘World Record Edition’ Grand Sport Vitesses costing €1.99m plus taxes. The world record setting car will also be on display at the Shanghai motor show, complete with the driver’s signature and top speed written on the door kickplate in silver marker.

Bugatti stated that the initial open-top speed target for the Veyron Grand Sport Vitesse was ‘just’ 233mph. However, when testing revealed that 400kph (248mph) would be possible, the engineers set about increasing their targets, with 254.04mph being the final result. Its all courtesy of the famous 8.0-litre, 16 cylinder Bugatti Veyron Super Sport engine having four turbochargers producing a jawdropping 1183 bhp.