After months of speculation and spy shots, the 2014 BMW X5 has finally been revealed by the Bavaria based manufacturer. Since its launch in 1999, the BMW X5 has gone from strength to strength and established itself as one of the world’s best SUVs. The third generation is more evolution than revolution as it builds on these strengths, but doesn’t bring about any radical changes. The new grille, bumper and headlamps are in alignment with BMW’s new direction in style and are reminiscent of the current 3-series and 5-series ranges. The bumper is slightly more aggressive than its predecessor too. A prominent character line runs down the side from the newly designed front apron all the way to the taillights. At the back, the new X5 gets a redesigned tailgate, new taillights and a new bumper with reflectors and twin tail pipes. The BMW X5 will be available with a choice of three engines. The X5 sDrive 35i comes with a 3.0-litre twin turbo straight six petrol unit producing 300 bhp and 406Nm of torque that can power the SUV from 0-100 km/h in 6.2 seconds. For those looking for extra thrust, the X5 sDrive 50i packs a potent 4.4-litre twin turbo V8 petrol motor putting out 445 bhp and 650Nm of torque, which can propel the SUV from 0-100 km/h in 4.9 seconds. An all new 3.0 litre turbo straight six diesel producing 251 bhp and 559 Nm of torque will also be on offer. All engines will be mated to an eight-speed automatic gearbox. For the first time ever, BMW is offering the X5 with rear-wheel drive on the X5 sDrive 35i (the one with the 3.0-litre petrol engine), and traditional all-wheel drive systems will be available as well. The 2014 BMW X5 is a classic case of ‘don’t fix it if it ain’t broken’. BMW seems to have figured out the formula to success in the SUV market and are now working to perfect it rather than reinvent it. The 2014 X5 is a well thought out vehicle and should be a worthy successor to the outgoing model. 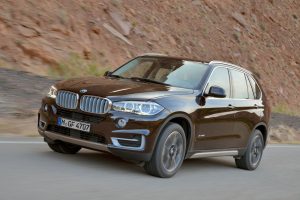 likethis
What's your reaction?
Awesome
0%
Epic
0%
Like
0%
I Want This
0%
Meh
0%
Posted In
AutoGyaan, BMW, Latest
Tags
X5
X5
About The Author