The midsize coupe is both wider and longer than its predecessor. BMW says the wheelbase on the 4 Series is 50mm longer than the old two-door’s, plus the new car is 26mm longer overall, with the track widened by 45mm at the front and 81mm at the rear. The roofline is also 16mm lower than before, and combined with the lowered suspension, the 4 Series Coupe has the lowest centre of gravity of any BMW currently on sale. That should make it quite nice to drive fast in the corners, better maybe than the current 3 Series. To add to this, BMW has tuned the springs, dampers and camber angles to make the car more responsive, while tweaking the the rear axle as well. The 4 Series Coupe gets the same lower grille as the dramatic 4 Series concept, which wraps around each of the foglights. The Air Breather mounted on each front wing was something else seen first on the concept before appearing on the 3 GT and new X5. It looks a lot like its 4-door brother, but the width provides a nice stance giving the car well balanced look and feel. Internationally, BMW will offer the 4 Series with 3 petrol and 3 diesel engine options. Kicking off the diesel range is the 420d, with the same 2.0-litre engine as the 320d saloon. This produces 181 bhp and goes from 0-100 kmph in 7.5 seconds. The 420i is the entry-level petrol model, with the same 181bhp output. Further up the range are the 3.0-litre six-cylinder 430d, with 254bhp, and the petrol-powered 428i and 435i, with 242bhp and 302bhp respectively. A 309bhp 435d model is the flagship, but is only available with the xDrive four-wheel-drive system. The 420i and 420d can also be fitted with four-wheel drive. No information on the engine lineup in India is available right now. The 4 Series Coupe will be available in three different trim lines – Luxury, Sport and M Sport. The Luxury line focuses more on overall amenities and upscale appearance, while the Sport and M Sport models are meant to offer much more performance-based kit and additions to make for a slightly more aggressive exterior. The M Sport model will offer stiffer suspension and upgraded brakes but an Adaptive M Sport set-up featuring adjustable dampers as well as 18-and 19-inch wheels are options on all models. The cabin doesn’t look all that different from the 3 Series, incorporating the same line of toys and creature comforts, and is offered in a variety of shades.

The new 4 Series goes on sale later this summer, and BMW has already confirmed pricing for some countries. In the US it will start at $41,425 and the range-topping 435i xDrive will set you back $48,925. In the UK, the base model will cost £31,575 and the 435i xDrive Luxury priced at £40,795. Watch this space for updates on its launch and pricing in India! 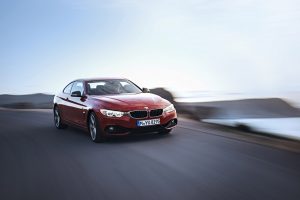 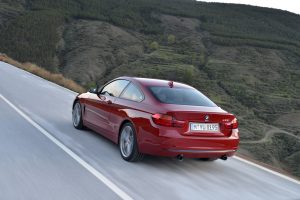