Nissan has announced plans of an upcoming all-electric racing car called the ZEOD RC (The Zero Emission On Demand Racing car). The Zeod RC which is said to be capable of a top speed in excess of 300 kmph, is shaped a bit like the closed-cockpit version of the DeltaWing (albeit, much better looking in our opinion) and will make its debut in 2014 at the 24 Hours of Le Mans. The ZEOD RC was displayed near the Circuit de la Sarthe last weekend at the 2013 24 Hours of Le Mans. The Nissan ZEOD RC has been invited by Le Mans organizers to compete as the Garage 56 entry in next year’s race, which is basically a spot on the grid held for vehicles with new and/or cutting edge technology. Apart from the announcement of a partnership with Michelin to develop tires for the ZEOD RC, Nissan has not revealed any technical specifications or information about the battery under the hood of the EV racer. However, Nissan has made it clear that they have their work cut out for them, and will be trying out various different motors and battery packs over the course of the year before making a final decision.

We have many options to consider and test. The test program is part of a longer term goal of developing a system and a set of rules for this type of technology in partnership with the ACO that would be best suited to competing at the highest level of this sport.
– Ben Bowlby, designer of the ZEOD RC

The ultimate goal of the ZEOD RC program, in terms of racing at least, is to sort out the feasibility of a LM P1 all-electric class for future Le Mans racing. Formula E is looking to have a similar impact, however the endurance aspect of Le Mans is much more relevant for electric technology and its future in production cars. 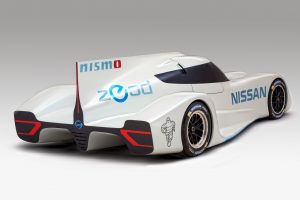 Nissan had the privilege of setting up camp in Garage 56 at the 2012 Le Mans race as well with Nismo’s sleek DeltaWing. It didn’t fare too well, after crashing out much before the 24 hours were over, but proved to be a step in the right direction providing a lot of data and insight for Nissan’s future, as is evident by the revolutionary ZEOD RC.