Engineers at the LFA Works that produced the Lexus LFA supercar, have had a lot of time on their hands since the 500th and last LFA rolled down the production line in December 2012. Now we know what all those carbon fibre experts have been doing with the world’s best Carbon Fibre machinery in their free time. They’ve been working on bicycles, called the Lexus F Sport. Now obviously, these aren’t your everyday go-to the market bicycles. There will be only 100 units in total and each will cost US $10,000 each. The black-and-white one-seater is very hi-tech, which it should be given the exorbitant price tag. The front derailleur is electronically controlled, for an instantaneous, smooth click into gear. And the shift levers are modeled after the paddle shifters in Formula One racers. The bike is heavy on lightweight carbon fiber. The frame, forks, seat, handlebars, seat post, rims and crankshafts are all made of the superexpensive, superstrong material. Except none of it is manufactured by Lexus, with all the carbon fibre being sourced from Takumi, in Taiwan. The Lexus F Sport also packs a Shimano Dura-Ace Di2 groupset with electronic shifters and weighs an astonishing 6.8 kilograms. Lexus crafstmen polish each frame for three hours to bring out the glow in the lacquer finish and exclusivity is still the norm for the Lexus LFA Works, with only one bike headed for Canada and two for the US.

The LFA was Lexus’ halo sports car and about a decade was spent by Lexus in its development. Even at US $375,000 per car, Lexus made a loss on each one they sold. Only 500 were produced, and the F Sport bicycles are touted by Lexus, as embodying the “principles and philosophy” of the LFA. 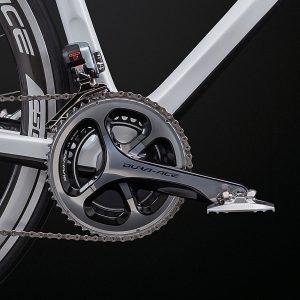 likethis
What's your reaction?
Awesome
0%
Epic
0%
Like
0%
I Want This
0%
Meh
0%
Posted In
AutoGyaan, Latest
Tags
bike
bike
About The Author