Even though Mini’s upcoming third-generation trademark three-door hatchback has already been spied upon sans all camouflage, the BMW-owned marque feels the need to release a concept previewing the next-gen design. This is it, and it’s called the Mini Vision Concept. It looks mostly similar to the next-gen Mini hatchback, except for a few typical concept-like styling touches, which never end up making it to the production vehicle anyway. The Mini Vision seems to combine styling elements of both its predecessors. It’s more rounded than the 2002 hatchback which rebooted the Mini brand, but more muscular than the bloated 2007 model. Modern accents like full LED headlights inspired by the Rocketman concept find their way on to the Mini Vision. Mini’s traditional floating roof keeps its place on the Mini Vision, while the concept shows side grilles which seem to be borrowed from the Countryman and Paceman. The interior will almost definitely not make it to the production version. Integrated Union Jack straps in the door panels make for a very cool interior, but surely not production-practical. Mini revealed the Vision Concept at an event called the Mini [email protected] We expect to see it on the auto show circuit this year before Mini unveils the third-gen F56 Mini Cooper Hardtop. 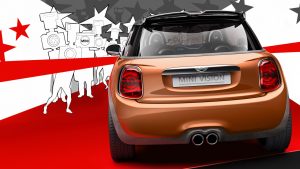