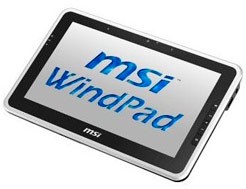 A Whole year after the launch of the iPad companies are talking about Windows 7 Tablets. The first to do this is MSI (HP slate limited to corp clients) the specs of the WindPad 100w

Update : Looks like the WindPad is officially been announced in India at a premium price of 34,990/- (which roughly translates 710$ in INR). Pricing loos okay to us for the first generation of Windows 7 Tablets. Expect it to fall to 20-25k range in a matter of months.

We are also trying to get a review unit.

Bharat Nagpal
Founder and Chief Editor of iGyaan. Bharat likes to keep on top of technology ! Follow Him on Google Plus : Google+
You Might Also Like
ComputingLatest
Read More