Next Assassin’s Creed Revealed in a Leak; Ubisoft Confirms Report

The next installment of the wildly popular Assassin’s Creed franchise has been leaked, and this time around the game is set in 19th century London during the Victorian era. According to internal sources, it’s called ‘Assassin’s Creed Victory’ for the time being, and will be coming to PS4, Xbox One and PC in fall 2015. Sources also indicate that Victory will apparently be developed by Ubisoft Quebec, and not Ubisoft Montreal.

This is what Ubisoft has to say after leaks were reported all over the web:

It is always unfortunate when internal assets, not intended for public consumption, are leaked. And, while we certainly welcome anticipation for all of our upcoming titles, we’re disappointed for our fans, and our development team, that this conceptual asset is now public. The team in our Quebec studio has been hard at work on the particular game in question for the past few years, and we’re excited to officially unveil what the studio has been working on at a later date. In the meantime, our number one priority is enhancing the experience of Assassin’s Creed Unity for players.

The leaks were apparently spotted by game-focused blog Kokatu, who also reported of seeing a seven minute ‘target gameplay footage’. The clip also notes that the footage was recorded using the new Anvil engine, which means that it was not pre-rendered.

The leaked footage shows an unnamed assassin in smoke-covered London, whose target is a Templar engaged in human trafficking of children. The assasin accepts the contract and is engaged in a battle on top of a moving vehicle. The fight then moves on to a train station where assassin gets on to a higher ground, swings using a grappling hook – a new gameplay mechanic, and takes out the target. 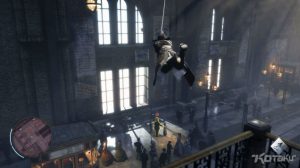