ASUS Launches UX21 ultrathin laptop; Goes all the way to Core i7 (PR) 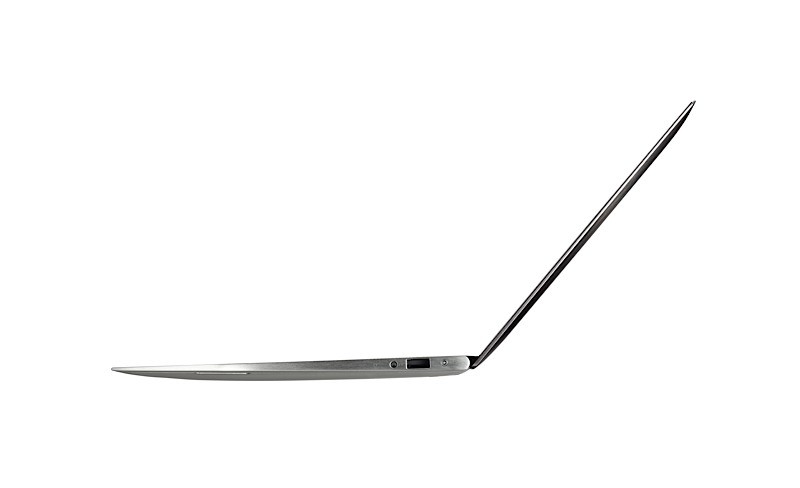 ASUS has unveiled a range of Ultra thin Laptops dubbed the UX21. 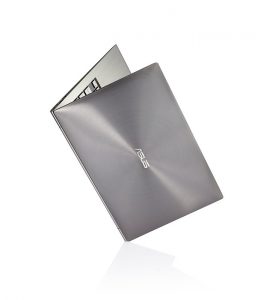 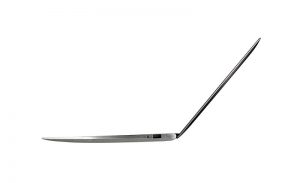 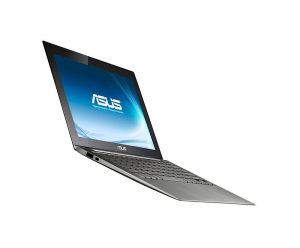 ASUS “INNOVATION BEYOND EXPECTATIONS” AT COMPUTEX 2011

Taipei, Taiwan (Computex, May 30, 2011) – ASUS Chairman Jonney Shih has unveiled the highly-anticipated Padfone along with the latest ASUS innovations, which include new UX Series notebooks, redesigned N Series notebooks with SonicMaster audio technology, the revolutionary and versatile Eee Pad Memo 3D, ultra-thin Eee PC X101 netbooks, and unique home entertainment devices such as the motion-sensing WAVI Xtion and the 27″ All-in-One high-definition ET2700XVT desktop PC. With “Break the Rules, Innovation Beyond Expectations” as the dominant theme this year, Mr. Shih has reiterated the company’s strength in cutting-edge designs and superior engineering skills to help bring users the devices of their dreams.
“Breaking the rules and changing the status quo are the keys to our success, and we strive to offer customers an experience that surpasses their expectations,” said Mr. Shih.

Innovation is at the heart of ASUS design and the new Padfone reveals exciting new possibilities for mobile computing and communication. This convergent device combines a smartphone and a tablet computer into one symbiotic gadget that allows consumers to choose the screen size that best fits their activities while seamlessly sharing data and 3G internet access.

ASUS is noted for its exquisite design, and nowhere else is this more evident than in the new UX Series, developed in close cooperation with Intel® to ensure the best products become available to consumers. These astonishingly thin ultraportables are made possible through the use of a strong but light aluminum alloy shell with a unique ‘spun’ finish on polished surfaces. The artistry of the series draws inspiration from luxury timepieces, displaying sharp edges, an oversized keyboard and smartphone-like touchpad for added comfort, as well as reinforced hinges for extended longevity. Measuring a mere 17mm at its thickest point, the needle-thin UX Series nonetheless packs impressive specifications, with the latest 2nd generation Intel® Core™ mobile processors up to the powerful i7, SATA 6Gb/s solid-state drives and the Instant On feature, which resumes the notebook in seconds.

ASUS continues to innovate in PC audio. The same SonicMaster technology that ASUS first developed with Bang & Olufsen ICEpower® for the incredible NX90 can now be enjoyed on the new N Series, where stunning high-gloss designs meet the very latest mobile technology. This latest N Series, co-designed by ASUS and world renowned designer David Lewis, comes with the addition of a dedicated external subwoofer for deep bass extension that would otherwise be impossible to replicate on a notebook. Desktop PC users can also experience the same well-appointed luxury with the 27″ HD All-in-One ET2700XVT desktop PC, which offers ultra-wide 178-degree viewing angles and optional 10-point multi-touch for smooth, fully consolidated computing.

Recognizing that no two users have quite the same needs when it comes to tablets, ASUS has introduced a fourth tablet to go alongside the recently announced Eee Pad Transformer, Eee Pad Slider and Eee Slate. Powered by the latest version of the Android operating system, the Eee Pad MeMO 3D has a 7″ multi-touch screen that can also be used with the supplied stylus for note taking in portrait orientation, plus a unique glasses-free 3D display mode for entertainment on the go.

The Eee Pad MeMO 3D is designed to be an alternative take on the 10″ tablet that is fast becoming a standard size. This portrait-oriented device uses a screen that can also be used more traditionally with all Android Honeycomb applications, should users choose to do so.

ASUS evolves the Eee PC further with new models that take netbooks to ever-greater heights. The new Eee PC X101 has been designed from the start to be the perfect ultraportable for modern mobile users, with its Intel® MeeGo operating system incorporating full support for a wide range of social networking services. Eee PC X101 Series netbooks are also offered with the Windows® 7 operating system, and models ship with both solid state and mechanical hard drive storage configurations.

Drawing on its research and development foundations, ASUS has worked closely with PrimeSense™, the leader in motion-sensing technology, in crafting the world’s first and only open-source, controller-free gesture-based device for PC. WAVI Xtion offers limitless enjoyment for consumers, upscaling PC fun onto big screen TV. The technology represents total integration of multimedia, social networking and gaming. The Xtion Browser affords internet usage with hand and body movements for an interactive experience, expanding web content with larger fonts, icons and graphics for livelier navigation. The Xtion Portal acts as an app store where users can purchase new games and utilities designed for WAVI Xtion, while social networking becomes more intuitive with a controller-free interface and exciting gesture input, also using an attractive visual style. WAVI Xtion ships with a game bundle that includes MayaFit™, Beat Booster, and DanceWall™, all perfect for exercise and fun for the entire family. Better still, the Xtion Engine incorporates gesture-based controls into many existing PC games, so consumers can experience them in a completely new way.

The ASUS Padfone is a device that explores one possible convergence between two popular mobile devices – the smartphone and tablet. The Padfone solves the problem of data transfer hassles and multiple SIM cards when both a smartphone and 3G tablet are used. With the Padfone, the smartphone docks inside the tablet to give users an expanded view to suit their tasks. With the phone docked, it can recharge from the tablet’s larger battery and the tablet can also make use of the smartphone’s 3G internet connection. The dual interfaces for both the pad and phone ensure an enhanced user experience as the layout is automatically adjusted for all activities such as video conferencing, web browsing and emailing.

Notebook PC users demand the very best performance in increasingly portable packages, which is exactly what the new ASUS UX Series delivers. Clad in a svelte aluminum alloy shell that has a unique ‘spun’ finish, the UX Series packs a number of impressive features, including 2nd generation Intel® Core™ mobile processors, including the powerful i7, to ensure blistering performance. Up to 7-hour battery charges mean that the UX Series is always ready for action – and with the Instant On feature it resumes work in seconds.

The new ASUS N Series combines a stunning design with the very latest mobile technology and legendary SonicMaster audio, which has already made a name for the ASUS NX90. The slim, glossy black exterior denotes a premium notebook with specifications to match, including cutting-edge features such as second generation Intel® Core™ mobile processors and USB 3.0. Developed together with Bang & Olufsen ICEpower®, ASUS SonicMaster ensures that the N Series sounds as good as it looks, with oversized internal speakers, sophisticated audio processing and a bundled dedicated subwoofer that delivers deep, rich bass that belies the notebook’s compact size. This latest N Series is co-designed by ASUS and renowned designer David Lewis.

The ASUS Eee Pad MeMO 3D is designed to be an alternative take on the 10″ tablet that is fast becoming a standard size. This portrait-oriented device has a 7″ multi-touch screen that can be used in the usual way with Android Honeycomb applications, but there’s also the added twist of stylus support, so users can opt for handwriting input and treat the MeMO 3D much like a digital notepad. Productivity is only one area where the Memo 3D scores highly, though. The bundled MeMIC Bluetooth hands-free headset makes it ideal for listening to music and making calls, while flipping the MeMO 3D into landscape turns it into a glasses-free 3D display that adds a new dimension to mobile entertainment. Consumers can enjoy movies, games and photos in 3D, all from the palm of their hand.

The ASUS Eee PC X101 is a new netbook that is designed to perfectly meet the needs of the modern mobile user who lives and works online. Just 17.6mm thick and weighing less than 950g, the Eee PC X101 can be slipped into a bag and taken anywhere, but this is no cut-down portable computer – it packs a 10.1″ screen, QWERTY keyboard and the latest Intel® Atom™ N435 processor.
Users can get online with 802.11b/g/n Wi-Fi, where the Eee PC X101 really comes into its own. The Intel® MeeGo operating system has full support for a wide range of social networking services and a raft of productivity tools built in, making this a netbook that’s ready for use right out of the box. There’s also the X101H model, which has all the same features but comes with a hybrid hard drive and choice of Window® 7 or MeeGo.

ASUS WAVI Xtion is a sophisticated multi-component technology, and the result of extensive cooperation, innovation and development. While ASUS has been working closely with PrimeSense™ in creating the core technology behind WAVI Xtion, the product also brings to market a host of additional pioneering highlights. Collaboration with AppSide has resulted in the creation of Xtion Portal, and ASUS has also worked with Hillcrest on the highly-interactive Xtion Browser. Bundled game DanceWall™, which gets consumers physically active as they enjoy themselves with family and friends, was developed by Softkinetic Studios.

Featuring a 27″ HD display with ultra-wide 178-degree viewing angles, HDMI-in ports, a digital TV tuner and SonicMaster audio, the ASUS All-in-One ET2700XVT is the perfect desktop for any home or office. This is more than a mere monitor – it is a full PC at far less the space requirements of other desktops, with optional 10-point multi-touch that makes it ideal for entertainment applications.

Bharat Nagpal
Founder and Chief Editor of iGyaan. Bharat likes to keep on top of technology ! Follow Him on Google Plus : Google+
You Might Also Like
ComputingLatest
Read More