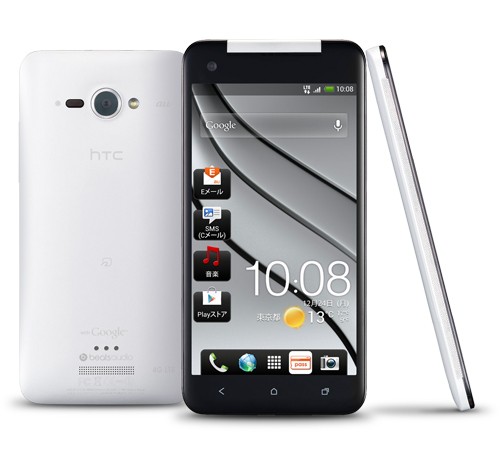 HTC has made it to the worlds first record when it comes to the display matrix with the new HTC J Butterfly. The phone is a Android 4.1 Jelly Bean device and features a 5-inch, 440ppi full-HD “Super LCD 3” panel. The HTC j Butterfly also has a 1.5GHz quad-core APQ8064 underneath which is actually a Snapdragon S4 Pro SoC.

The HTC J Butterfly also has 2GB RAM, 16GB internal storage, microSDHC expansion, 802.11a/b/g/n WiFi, Bluetooth 4.0 (LE), NFC, LTE and CDMA/GSM/UMTS/GPRS radios which means its perfect for the rest of the world. The phone weighs 140g , and it’s waterproof as well, rated at IPX5. The Battery is marked at 2,020mAh although the specs arn’t final the phone has been launched with thte carrier KDDI in Japan. Users of  KDDI network can get this mammoth and powerful phone in early December, in color options of red, white or black. HTC is a Taiwanese manufacturer of smartphones and tablets. The company initially made smartphones based mostly on Microsoft’s Windows Mobile operating system software, but in 2009 it began to shift its core focus away from Windows Mobile devices to devices based on Android OS, and in 2010 to Windows Phone OS as well.

HTC is also a member of the Open Handset Alliance, a group of handset manufacturers and mobile network operators dedicated to the advancement of the Android mobile device platform. The HTC Dream, marketed by T-Mobile in many countries as the T-Mobile G1 or Era G1 in Poland, was the first phone on the market to use the Android mobile device platform.