With nearly a week left before HTC officially reveals its flagship smartphone in Barcelona, it seems that the device is already out in the open. MobileGeeks has spotted a German listing for a smartphone that looks strikingly similar to the One M9 images that were spotted last month.

If the leaked images are authentic, we may see just one camera on the rear compared to its predecessor. Images also suggest that HTC has moved some buttons around, we may see the power button right below the volume rockers on the right, unlike the M8 where it was located on top, making it quite a task to reach at times given the size of the M8. 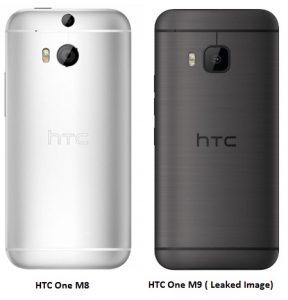 In addition, the BlinkFeed news stream looks slightly different suggesting the possibility of a new software. Even the phone’s outer body appears notably thicker than the One M8.

Though nothing is officially confirmed, we may be in for a few surprises in a week’s time. In the meantime, here’s what we can expect under the hood from HTC’s next flagship:

Abhinav Mishra
iGyaan Network's Newbie, Abhinav Loves Gaming, Cars and Technology, You can Find Him on PSN Bragging About his FIFA Skills.
You Might Also Like
HTCLatestMobile
Read More