The approaching Mobile World Conference (MWC) will witness many new smartphones, tablets and other high-end gadgets, and major companies can’t seem to contain their excitement about the event. Samsung and LG have unwrapped some of their devices ahead of the event, and the latest firm join in is Sony. 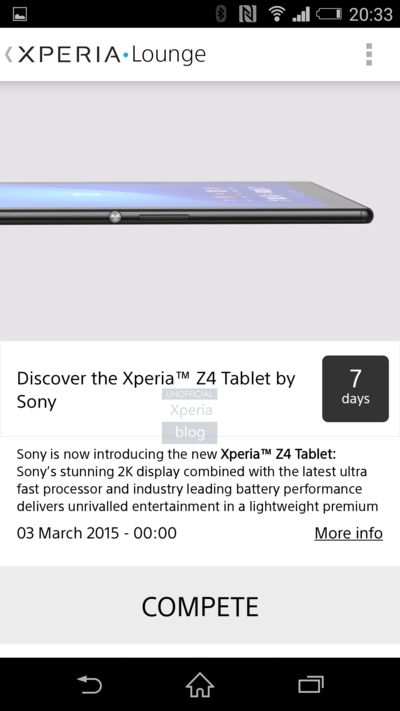 Recently, Sony gave a glimpse of its next tablet titled Xperia Z4. As per Xperia blog, a brief description along with an image was accidently posted on the Xperia Lounge app of the company. The statement proudly informs of Sony Xperia Z4’s “2K display” and the “latest ultra fast processor”. It also reads that the tablet has “industry leading battery performance.”

The design of the tablet looks sleek and from the picture, it is evident that volume rockers are placed on the right side. There is one circular key below it which looks like a power button. As the information was accidently slipped, details of the device are still under wraps. But one thing is clear that the phone will make an appearance on 3rd of March in Barcelona.

Meenakshi Rawat
iGyaan's newbie Meenakshi handles content at iGyaan. She is an ultimate foodie, loves travelling and likes to read.
You Might Also Like
GadgetLatestSony
Read More