by Meenakshi RawatMay 18, 2015
0
Now Reading
Samsung Might Launch the Galaxy Note 5 this July
Browse This Page Samsung Galaxy Note 4 release last September was a major overhaul of the previous iteration. It was showered with critical acclaims for its fine screen quality, excellent construction and versatile S pen stylus. However, the sheen was short-lived for Samsung and was soon seized by the latest iPhone 6 series. The Korean smartphone maker is planning to wind up the honeymoon period of the premium smartphone, with the early launch of its Galaxy Note 5. As per Whowired, the next flagship model by Samsung will be unveiled at the end of July, much before the expected time in September. 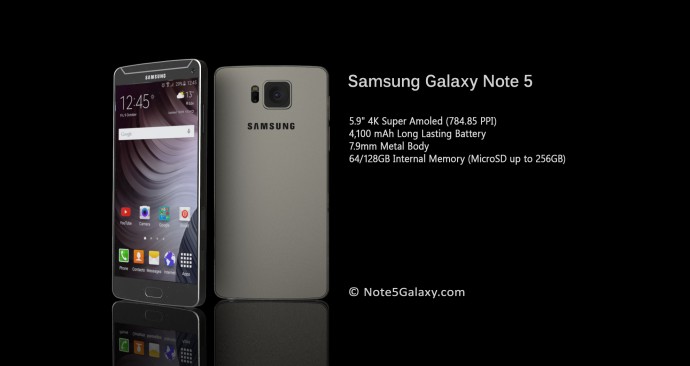 Galaxy Note 5’s early launch seems to be a strategic plan to eclipse the market of iPhone, who’s sales exceed 50 million per quarter. However, the source claims that it is due to the early development of the handset. Samsung enjoyed a monopoly in the phablet arena with the large screen of its Note series, but the Cupertino-based firm quashed the Note dominance with the iPhone 6 Plus. Samsung is now geared to reacquire the market share with the superior and even bigger Galaxy Note 5. If we go by speculations, the next Samsung phablet will sport a 5.9-inch Super AMOLED 784ppi display. The battery capacity is speculated to be robust at 4100mAh. The device might come in two variants with 64GB and 128GB internal storage space, which can be extended as much as 256GB. A powerful Exynos chipset is reported to power the device, besides Qualcomm Snapdragon. The latest Android operating system will be preloaded in the device. Know more about the device here.

With Galaxy Note 5, Samsung will break the traditional practice of introducing the Note flagship before the IFA opening. The Korean firm hasn’t stated anything about the same, and things about the gadget will be clear with an official announcement soon. Stay tuned for more updates on Samsung Galaxy Note 5.