Blackberry has stopped seeding the Blackberry messenger for iOS and Android apps following a leaked Android app that caused server and stability issues with the Blackberry messaging network.There were too many simultaneous users, the company says; with over 1.1 million active clients in the first eight hours of the initial seed.

BlackBerry says that it has tried to address the problems caused by the leaked app throughout the day, but to no avail, requiring it to halt its launch plans. The company says that those that have already downloaded the iOS version of the app will still be able to use it, but it will not be releasing it to any new markets at this time. The leaked version of the Android app will be disabled. 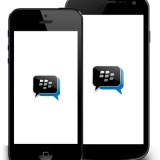 Blackberry now plans a  “staggered country roll-out” for Android and will soon restart the rollout for iOS. The company was hesitant in giving a timelinefor this new rollout, only saying

our teams continue to work around the clock to bring BBM to Android and iPhone, but only when it’s ready and we know it will live up to your expectations of BBM.”

The company’s official statement is below:

Prior to launching BBM for Android, an unreleased version of the BBM for Android app was posted online. The interest and enthusiasm we have seen already – more than 1.1 million active users in the first 8 hours without even launching the official Android app – is incredible. Consequently, this unreleased version caused issues, which we have attempted to address throughout the day.

Our teams continue to work around the clock to bring BBM to Android and iPhone, but only when it’s ready and we know it will live up to your expectations of BBM. We are pausing the global roll-out of BBM for Android and iPhone. Customers who have already downloaded BBM for iPhone will be able to continue to use BBM. The unreleased Android app will be disabled, and customers who downloaded it should visit www.BBM.com to register for updates on official BBM for Android availability.

Bharat Nagpal
Founder and Chief Editor of iGyaan. Bharat likes to keep on top of technology ! Follow Him on Google Plus : Google+
You Might Also Like
AndroidBlackberryiOSLatest
Read More