Apple Music has Come to Android But With Glitches

by Sanket VijayNovember 12, 2015
5
Now Reading
Apple Music has Come to Android But With Glitches
Browse This Page Apple Music has finally arrived on Android. The newest music streaming app is the third Apple app to make its way to Android – the first to being Move to iOS and BeatPill+. Apple Music is something many Android users have been waiting for. It is one of Apple’s better launches this year and one that has pleased music lovers all over. The Android app looks similar to Apple Music on iOS with only some differences that are particular to Android. The design is pretty much the same and all the Apple Music options are there including Beats Radio. True to Android the app has a left slide-out menu that features the For You, New, Radio, Connect, Playlists and My Music tabs. The For You section is packed with albums and curated playlists based on your taste. The suggestions look just like the iOS.

But those are just the pros to the story. The Android beta version of the Apple Music comes with a host of bugs and glitches that are quite putting off.

The app is far from working smoothly at the moment. Saved playlists and album artworks take a long time to load properly even with fast network connectivity, and you’re left with black spaces and a white background that makes the overall app a dull affair. 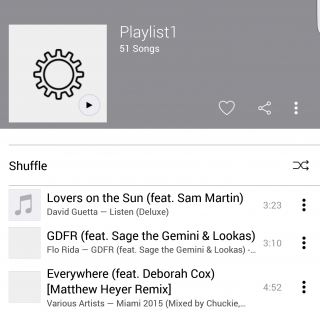 Downloading multiple songs or a playlist seem to fail occasionally while single downloads work fine. Since it’s still in beta stage one expects the app to come with some issues. The updated version will look to smooth things out.

Furthermore, the app does not sync with your music folder, which one would have preferred since Android users tend to use their phones like an MP3 player, storing music files for years. Thus, the My Music page will only show songs purchased from iTunes and songs saved from Apple Music. Google Play Music allows streaming as well as downloaded music files so Android users may just stick with that. Apple Music has a massive library of music and one can pretty much find anything in there. For users in India, this means that there is now a great alternative for popular music streaming apps like Saavn, Wynk and Gaana. To download the Apple Music for Android, head on over to the Google Play Store and try it out. As mentioned above, the app has a 3-month free trial after which you’ll have to pay to stay on.

Sanket Vijay
When not indulging in reading or writing, Sanket fanboys over The Flash, Star Wars, Coldplay, and U2. And pizza, he loves his pizza. Follow him on Instagram for more.
You Might Also Like
AndroidApps and SoftwareLatestMobile
Read More