HTC is expected to launch its 2018 flagship, the HTC U12 at MWC 2018. Along with the flagship smartphone, there have been rumours of an entry-level device as well. HTC might launch the HTC Desire 12 at MWC 2018 with an 18:9 aspect ratio and entry-level specifications. However, a new image of the retail box has revealed the key specifications of the HTC Desire 12. This also seemingly confirms that the device is real and will be launched at MWC 2018. 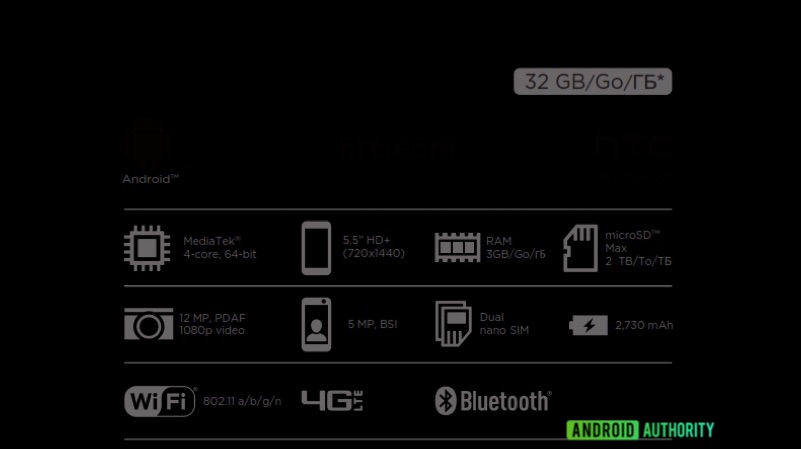 According to the leaked image of the box, the HTC Desire 12 will have a 5.5 inch display with a 1440 x 720 px resolution. This translates into an 18:9 aspect ratio. The industry has certainly moved on from the 16:9 aspect ratio and it won’t be long before even entry-level devices start launching with this aspect ratio.

Under the hood, the smartphone will have a MediaTek chipset with a quad-core chipset, 3GB of RAM and 32GB of onboard storage. The storage will be expandable up to 2TB via a microSD card. Powering the device will be a 2730 mAh battery. The box doesn’t reveal the version of Android it will run out of the box. However, it is possible that the HTC Desire 12 will run Android 8 Oreo out of the box.

The Desire 12 will have a 12MP camera on the back. It will record 1080P videos at 30fps. On the front will be a 5MP BSI sensor which will, in all probability, record 720P videos.

However, these are still leaks and nothing can be absolutely certain right now. Hence, until HTC launches the Desire 12 at MWC 2018, these are all speculations.

It is yet to be seen whether the HTC Desire 12 will be launched in India. The Indian smartphone market extremely price sensitive where companies like Xiaomi has shone. If HTC does launch the Desire 12 in India with a MediaTek chipset, it will have to be priced very competitively. However, the HTC Desire 12 might bring something else to the table with its 18:9 aspect ratio. Therefore, the price will be really important for it to succeed in the India market, at least.