The Range Rover evoque is the most anticipated SUV from Tata owned Land Rover Automobiles. The SUV is a highly economical SUV to sport a Range Rover branding, a new modern design and styling and a fairly low price of 38-52 Lac (fairly low compared to regular Rovers)

The Range Rover Evoque is expected to hit India end 2011, beginning 2012, bringing a whole new segment into the Range Rover brand. A segment which has picked up over 200% in the past year in India. The company plans to take on sales from people looking for alternatives to the BMW X3 and the Audi Q5 . Range Rover expects to sell over 500 units initially during launch.

The Range Rover Evoque was spotted in Pune with the protective strips on, whats interesting is that the vehicle appears to be a coupe, which may or may not be launched in India. 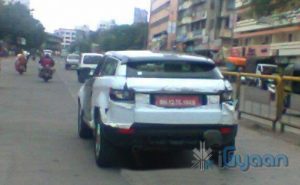