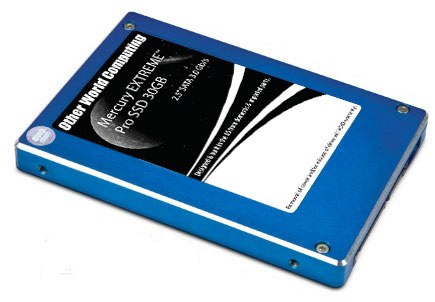 OWC has announced its new budget 3G SSD lineup, latest 2.5-inch SSD, the 30GB variant of its Mercury Extreme Pro 3G series which has a 3GB/s transfer rate. The company claims that the drive is complaint with all OSs and will give sustained data rates throughout. The drives are on sale now, and the prices start at just US$ 68 or about INR 3000.

$67.99 MSRP SSD Ideal for ‘Supercharging’ Macs and PCs with Faster App and OS

No Slow Down With Repeated Use

Up To 100x Greater Data Protection

By utilizing SandForce DuraClass™ technology along with no moving parts, the OWC Mercury EXTREME Pro 3G provides an increase of up to 100x in data protection, compared to ordinary SSDs and leading enterprise-class hard disk drives. By combining the highest level of Error Correction Code (ECC) and SandForce RAISE™ (Redundant Array of Independent Silicon Elements) technology, along with 7 percent over provisioning, the OWC Mercury EXTREME Pro 3G provides RAID-like data protection and reliability without loss of transfer speed due to parity.

To ensure the highest level of customer satisfaction and confidence, the OWC Mercury EXTREME Pro 3G SSD comes backed by a 30-Day Money Back Guarantee. If consumers are not completely satisfied with their OWC SSD for any reason, they simply need to contact OWC’s award-winning Customer Service department – which offers 24/7 Live Chat support – to request a full, hassle-free refund.

“While small in capacity, this new 30GB model offers a huge performance boost in application and OS operation,” said Larry O’Connor, Founder and CEO, Other World Computing. “At its price point, you can’t beat its use as a boot and app load drive while offloading storage and backup duties to platter based drives.”

While the OWC Mercury EXTREME 3G 30GB SSD comes with the latest SandForce firmware revision, it also includes the industry’s first and only Apple/Mac-compatible firmware updater should the firmware need to be updated in thefuture. The firmware updater eliminates the need for a PC, ownership of Windows or other operating system, or the creation of a specially designated drive partition that other brand SSD updaters have required. For more information onOWC’s proprietary firmware updater, visit:http://eshop.macsales.com/tech_center/OWC/SSD

Desktop users wanting to experience the performance benefits of an OWC Mercury SSD can choose from one of five adapters OWC offers starting at $3 for utilizing 2.5″ drives in 3.5″ bays. For an overview of these to determine which adapter can meet particular needs, visit http://blog.macsales.com/11999-drive-adapters-galore%E2%80%94which-is-the-right-one-2

Compatible with Macs, PCs and external enclosures that utilize 2.5″ drives, the OWC Mercury EXTREME 3G 30GB SSD is available now from Other World Computing as well as through select retailers. The $67.99 MSRP drive features 7% over provisioning, Tier 1/Grade A NAND, and a three-year warranty. For more information on the OWC

Industry’s Most Comprehensive SSD Line for Macs and PCs

The new OWC Mercury EXTREME 3G 30GB model joins OWC’s existing line of performance-leading, world record-breaking ‘3G’ (3Gb/s) and ‘6G’ (6Gb/s) Mercury SSDs available for nearly every Mac and PC produced over the past decade in capacities from 30GB to 480GB starting from $67.99. For more information on the complete OWC Mercury

Bharat Nagpal
Founder and Chief Editor of iGyaan. Bharat likes to keep on top of technology ! Follow Him on Google Plus : Google+
You Might Also Like
GadgetHardware NewsLatestTech
Read More