by Bharat NagpalJune 28, 2012
10
Now Reading
Everything you need to Know about the Nexus 7 Tablet from Google
Browse This Page Google has launched their first official Tablet dubbed the “Nexus 7”. Priced aptly or in-fact cheaply at US $ 199 the Tablet will ship with Jelly Bean Android 4.1 out of the Box . The Nexus 7 is made by ASUS and has a 7” 1280×800 HD display (216 ppi), which is a Back-lit IPS display, and has Corning Gorilla Glass front.

The Nexus 7 is powered by a Quad-core Tegra 3 processor and has a 4325 mAh battery, it has a 1.2MP front-facing camera and weighs only 340 grams.

You get two storage options 8 or 16 GB internal storage and Nexus 7 comes standard with 1 GB of RAM. At just 10.4 mm thick the Tablet is pretty slim and has the standard features like, WiFi 802.11 b/g/n and Bluetooth. Apart from that the Nexus 7 also has Microphone, NFC (Android Beam), an Accelerometer, GPS,  Magnetometer and a Gyroscope. With the Music Manager, you can easily import your entire iTunes music library* into Google Play. Once your music is imported it automatically becomes available on Nexus 7. Take your music anywhere with Nexus 7. When you upload your existing music library to Google Play (up to 20,000 songs for free ) you can stream all your tracks and playlists from the cloud.

Google Now will also come to the Nexus 7, it tells you today’s weather before you start your day, how much traffic to expect before you leave for work, when the next train will arrive as you’re standing on the platform, or your favorite team’s score while they’re playing. The Knowledge database build around your likes and wants and build your phone to become more and more personal over time.

Your Standard Google Apps come preloaded on the Nexus 7, and the Chrome Browser finally exits Beta to come into final release. Everything is designed to work seamlessly on the Nexus 7. Excited Yet? We Are! 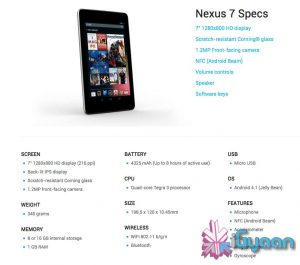 Bharat Nagpal
Founder and Chief Editor of iGyaan. Bharat likes to keep on top of technology ! Follow Him on Google Plus : Google+
You Might Also Like
AndroidAsusGoogleiGyaan
Read More