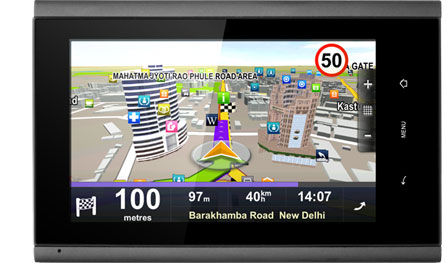 MapmyIndia, provider of digital maps, navigation and location-based services, has launched CarPad 5, a connected car product. Built on Android OS, CarPad 5 is an all-In-One GPS Navigator, Smart Phone and 3G Tablet. It 5 runs on a 1GHz Samsung processor (Cortex A8, S5PV210) and features a 5 inch capacitive touch screen. It is priced at Rs 19,990 and contains the CarPad windshield mount and Car charger.

Rakesh Verma, managing director at MapmyIndia said that the CarPad 5 is one of the many in-car productivity gadgets they plan to launch in the near future.

The navigation device is 3G enabled and allows users to call, message, mail and chat, search and browse the web at high speed, and access social networks.

Shivaank Rana
iGyaan's Carlos Santana! Shivaank loves Apple products! He stays up to date with the latest happenings of the tech world and gets his hands dirty with the latest Gadgets! Follow Him on Google Plus : Google+
You Might Also Like
AndroidLatestMobile
Read More