A new upcoming device the GT- N5110 is now confirmed to be the alleged Galaxy Note 8 thanks to a filing at the FCC. But here is the catch, the device has only WiFi and Bluetooth radios and is described as a “personal tablet”. The company has been kind enough to show the Galaxy Note 10 and Note 2 Screen dimensions to confirm that this is indeed a Galaxy Note device. The Galaxy Note 8 is said to be powered by a Exynos 4 Quad SOC which has a processor clocked at 1.6 GHz. The image filed at the FCC clearly shows the S-Pen housing and the rear facing camera as even spotted in the Galaxy Note 8 leaked images. 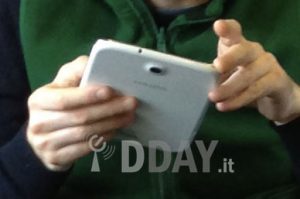 Will Samsung peg the Galaxy Note 8 in the low budget tablet market space or the upper middle segment is yet unknown. But, the fact that the company is only filing for a WiFi only device indicates that there indeed may be a a Sub US$ 300 Galaxy Note 8 tablet after all. Translating to roughly 18000 Indian Rupees, the tablet would really attract eager buyers, thanks to the S Pen functionality.