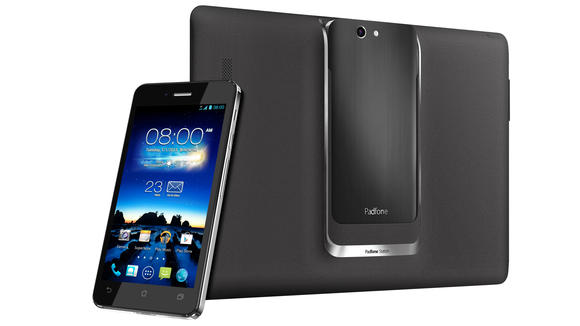 Asus has announced a new version of their Padfone, the Asus Padfone Infinity, which is a 5 inch smartphone and 10 inch tablet device that can be docked together to form one device.

The successor to the company’s hybrid tablet/smartphone has a redesign with an aluminum back and edge-to-edge glass display, a 5-inch display with 1920 x 1080 resolution and 441 PPI.

The PadFone Infinity runs Android 4.2, the latest version of the OS, and is powered by a 1.7GHz Qualcomm Snapdragon 600 quad-core processor, and an Adreno 320 Graphics processor. It has 2GB RAM and offers 32GB/64GB of internal storage. The PadFone also supports LTE connectivity and NFC.

The phone itself has a unibody design and is made of aero-space grade aluminum alloy, with brushed finish.

The Asus Padfone Infinity also features a 2,400 mAh battery with up to 19 hours of talk time over 3G and up to 40 hours when it is docked with the tablet, it will launch in Europe in April.

No word on Indian pricing and availability yet!

likethis
What's your reaction?
Awesome
0%
Epic
0%
Like
0%
I Want This
0%
Meh
0%
Posted In
Asus, Latest
Tags
price in india
price in india
About The Author