The hypercar which refuses to die is back for one last hurrah, or so Pagani would like us to believe. We say this since Pagani has announced more than a few models of its most successful car, the Zonda, as the last of its kind. But if this really is it, they’ve definitely saved the best for last. The Pagani Zonda Revolucion is quite simply a Zonda R on crystal meth.

You would think that the Zonda R was pushing the limits with its 740 hp engine, to the point where it wasn’t road-homologated and was only permitted to be driven on race tracks. The Zonda Revolucion has one-upped its older brother, with an evolved version of the same AMG Mercedes 6.0-liter V12 now producing an astonishing 800 hp and 538 ft-lbs of torque. Due to monocoque structure of carbon-titanium, it boasts a curb weight of only 1070 kgs resulting in a mind-boggling power to weight ratio of 748 hp per tonne. The engine is mated to a 6 speed magnesium transversal and sequential gearbox which Pagani claims can change gears in 20ms. A Bosch-developed traction control with 12 different settings and a new ABS system helps the driver to adapt the behaviour of the car to his liking. Most impressive of all is a Formula 1 style drag reduction system (DRS) on the rear wing.

The system has two different operating modes, both can be activated by the driver at any time. The manual system is controlled with the DRS button on the steering wheel. The rear wing changes between maximum and minimum downforce settings, at the occurrence of a lateral acceleration of + / – 0.8 g and a minimum speed of 100 km / h. Holding down the DRS for  more than two seconds engages the DRS to work automatically according to the algorithms developed by the Pagani Automobili engineers during the development phase.

New, ligther and more durable Brembo carbon ceramic brakes take the responsibility of stopping the fastest and most outrageous Zonda ever. Personally signed by Horacio Pagani, the Zonda Revolucion will set you back $2.9 million (Rs. 16.5 Crores before duties). 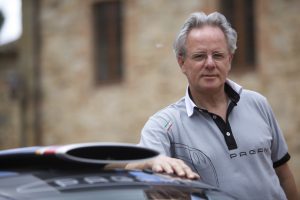