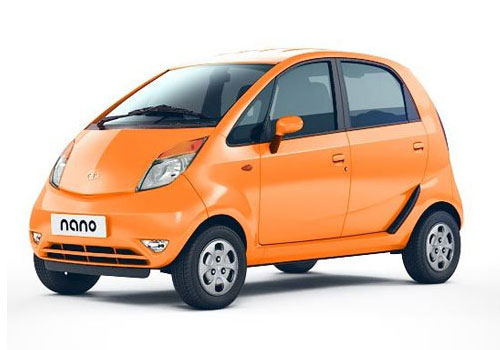 The 2013 Tata Nano is all set to hit the markets next week, however you will be hard pressed to tell the difference between itself and its predecessor. The 2013 Nano comes only with minor cosmetic changes and no significant upgrades.

The 2013 Nano gets new bumpers and strips of chrome both on the front and rear on what is otherwise a largely unchanged exterior. The rear bumper does get bigger air vents though for better cooling of the engine.

The noticeable change on the inside is the addition of a glove box, with the rest of the interior staying largely the same except for some colour, trim and fabric changes. The top-end model however will come with an integrated music system (with both speakers placed on the dashboard) with CD, MP3, Aux-in, USB and Bluetooth capabilities. Such additions may make the Nano more appealing to its customer base.

Other upgrades are largely focused on improving the quality and reliability of the car including a new clutch to replace the highly criticized one on the outgoing model. A few mechanical and electrical upgrades have also been done. The proven 623cc, twin-cylinder engine is carried over from the 2012 model and continues to deliver acceptable performance and impressive fuel economy.

The 2013 Nano is something of a stepping stone for the much awaited power steering and CNG equipped variants, both of which are expected by the end of the year. The power steering would surely help Tata’s sales as the effort required to park this car due to its heavy steering is well accounted in the automotive world. The new Nano is expected to come with a marginal increase in price.

Lakshya Agrawal
A mechanical engineering student, Lakshya eats breathes and sleeps cars. He spends his days working on a formula racing car, and nights listening to electronic music. A perfect new connection to the iGyaan Team.
You Might Also Like
AutoGyaanLatestTata
Read More