At a time when every major manufacturer has shifted its focus towards touchscreen phones, Blackberry remains adamant on providing the QWERTY experience to their customers that they were once famous for. Hence, the Blackberry Q10. In terms of its design, the Blackberry Q10 will remind you instantly of any other QWERTY Blackberry ever made. It ditches the trackball/trackpad of the older BlackBerry devices in favor of a touchscreen display that works pretty well, though we still really miss the hardware buttons.

The Blackberry Q10 is a compact phone, sporting a small display with a keyboard underneath. With a soft, rubbery rear case and a plastic band along the sides, the Blackberry Q10 shares obvious design cues with BlackBerry’s other new device, the full touchscreen Z10. Surrounding the square screen is a thin bezel on the bottom and sides, while above the screen is where you’ll find a BlackBerry logo, front-facing camera and its speaker. Below the screen is the star of the show, the QWERTY keyboard. 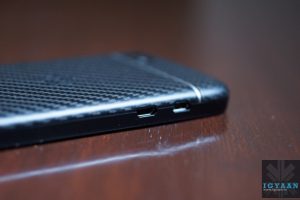 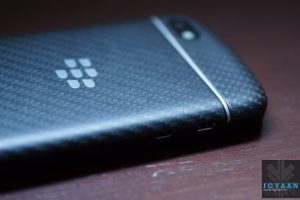 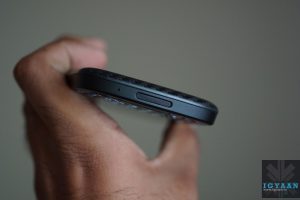 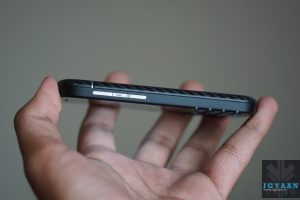 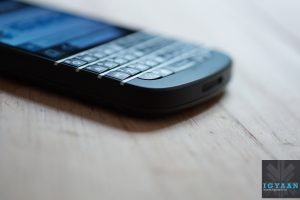 The back panel of the black Blackberry Q10 has a carbon weave texture which Blackberry claims is unique to each device.

Overall, it looks and feels elegant, refined and professional. Moving on to the keyboard, one thing to note is that the once curved keyboard has now been straightened out and the metallic frets separating the rows of characters are now slightly raised for improved tactile feedback – in other words you should be able to feel where your thumbs are on the board more easily. The break in the keys is a nice clean look however and the overall size of the keyboard is similar to previous devices.

The Blackberry Q10 is equipped with the famous Qualcomm Snapdragon S4 MSM8960 SoC, operating at 1.5 GHz, and the integrated Qualcomm Adreno 225 graphics card with 400 MHz core frequency and 2 GB of RAM. It has a 3.1-inch Super AMOLED touchscreen, albeit with a square 720 x 720 resolution rather than a widescreen aspect like a typical touchscreen phone. 16 GB flash memory and LTE round up the specifications of the Blackberry Q10. You can reach the entire specs list at the top.

The 720 x 720 pixel, 3.1-inch square screen doesn’t feel too small at first glance, especially since the narrow bezel allows the screen to command maximum attention when it’s on. It’s also pixel dense, a key factor in readability. BlackBerry 10 defaults to a text size of 8 and small fonts need to be crisp to be legible. The Super AMOLED touchscreen isn’t as bright as we’d like, yet is good enough for sunlight visibility. Colors pop and blacks are deep, as we’d expect with AMOLED. Viewing angles are generally good, though off-center a blue tinge creeps in that’s really noticeable on light backgrounds.

Just as with the Z10, the BlackBerry Q10 is powerful enough to run BlackBerry 10 smoothly with no lag or performance hiccups. If anything, the Q10 feels faster, potentially because the smaller screen requires less oomph or the update to version 10.1 sped things up all around.

The square screen means that videos on the BlackBerry Q10 are letter-boxed, which is disappointing. Playback though is quite smooth.

The speaker that sits on the bottom edge of the Q10 is well-placed; you’re unlikely to muffle with your hands. Overall audio quality is decent for a smartphone and loud enough to be heard over some background noise.

The BlackBerry Q10 has the same 8-megapixel camera as the BlackBerry Z10. While it has some neat features that allows you to choose the best photo, the actual quality of the pictures left a lot to be desired. It’s just not on the same level with pictures we shoot with other smartphones from this price segment. There’s more noise in mixed light shots and little crispness or detail in outdoor pictures. We’re glad that the BlackBerry 10.1 update brought HDR to the feature set since there aren’t many at hand. It balances shadow and bright light better than Auto but requires a very steady hand. There’s no shutter icon in the camera app; to snap a picture you have to tap the display or press the space bar.

Battery wise, the Q10 is great. It requires less power to run than its Z10 cousin, but includes a larger 2100 mAH battery. With this size battery, the Q10 easily lasts all day and with regular usage, it can round out the day with around 15-20% of battery life left. During calls, voices came through the earpiece and speaker clearly and we only encountered a bit of static in a low bar area. Our voice came through loud and clear on the other end as well in quiet and semi-noisy situations. The phone though is able to latch on to cellular networks even in weak signal areas.

There are a million touchscreen smartphones in the world. There aren’t many phones with good physical keyboards (and the competition mainly consists of other BlackBerry devices). The BlackBerry Q10 too serves those people who still feel the need for a physical keyboard and for those who are still BlackBerry purists.

The actual BB10 operating system is great and its implementation is clean. For people who prioritize this above everything else, including good apps, the BlackBerry Q10 is a decent buy, but the pricing of the device is too high for most.

likethis
What's your reaction?
Awesome
0%
Epic
0%
Like
0%
I Want This
0%
Meh
0%
Posted In
Blackberry, Latest, Review
Tags
About The Author

Shivaank Rana
iGyaan's Carlos Santana! Shivaank loves Apple products! He stays up to date with the latest happenings of the tech world and gets his hands dirty with the latest Gadgets! Follow Him on Google Plus : Google+
You Might Also Like
BlackberryLatestReview
Read More