Live from the Samsung Forum 2011 : Samsung’s New Lineup of Full HD and 3D monitors : Eyes On Check out the Pictures and details below, with a quick video of them coming shortly. 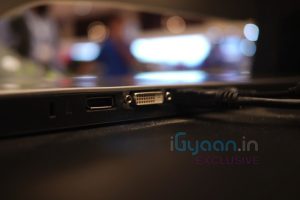 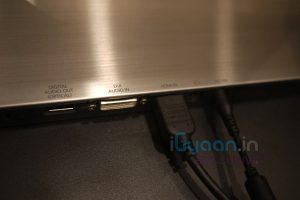 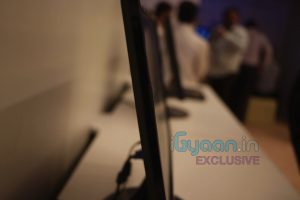 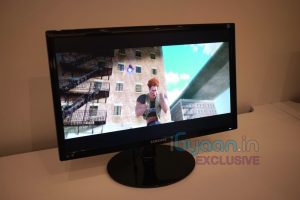 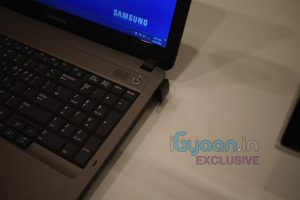 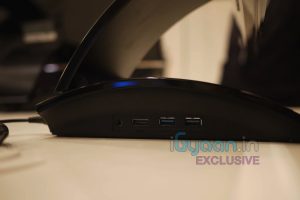 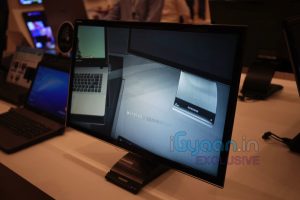 The monitors enable cleaner, flicker-free textures for fast-moving games in the 120Hz mode, delivering a comfortable 3D viewing experience without any interruption. The SA 750 also boasts blazing fast response time (2 ms) for an optimal gaming and movie viewing experience, without ghosting or streaking.

Adding appeal to eco-conscious users, Samsung’s SA 750 features an Eco Light Sensor that saves energy and creates a comfortable viewing environment by automatically adjusting the brightness of the screen based on ambient light, while the Eco Motion Sensor contributes to ease of use and lower energy consumption by automatically turning the display on or off when a user is within, or has left, the vicinity of the monitor.

The SA 750 is a sophisticated design product featuring a narrow bezel, compact, cylindrical stand with glowing buttons and UltraSlim depth, the slimmest in the world.

The TA 3 Series includes a 21.5-inch LED monitor that offers full HD 1920×1080 resolution and a brightness of 250cd. The TA 3 Series can receive TV broadcast signals through a built-in tuner. Like a docking station, Samsung’s Central Station Series 7 and 5 monitors serve as hubs that easily connect a user’s laptop to a range of other devices without the hassle of plugging and unplugging multiple cables every time. After the initial setup, when the user connects LAN and audio cables to the Central Station monitor, the system is primed for instant use the next time the user is ready to connect; all the user has to do is link his or her laptop to the Central Station using a single USB connection. Exclusive to the CA 750 is an auto wireless detection option, which can free users from the restriction of wires by automatically finding and connecting with a user’s laptop.

The CA 750 and CA 550 Series also create a better, more comfortable viewing experience by instantly transforming a small laptop screen to a 23- or 27-inch screen with LED backlight and superior picture quality. The monitor offers full HD 1920×1080 resolution and blazing fast response time (2 ms) to prevent ghosting or streaking. Samsung’s Mega DCR technology boosts the contrast level to more than a million to one, showing life-like depth and vivid color on any multimedia content. Additionally, the CA 750 and CA 550’s ergonomicdual-hinge design can change the height or tilt of the screen with ease. The Auto Configuration feature automatically adjusts the screen resolution between the user’s laptop and Central Station monitor when the two are connected via USB.

Among the many input and output options offered by the Central Station, the CA 750 and CA 550 support USB 3.0 technology, which enables users to transfer data 10 times faster than by USB 2.0, and to charge mobile devices twice as fast as by conventional electric charging. Despite this power, the system has earned both Energy Star and EPEAT Gold ratings by helping users save energy. Additionally, Central Station automatically powers on or off when a laptop is connected or disconnected. The system’s Eco Saving mode enables users to choose the energy consumption level from three options: 0 percent, 25 percent and 50 percent down—meaning users can save on the system’s energy costs by up to 50 percent. Featuring ultra-thin bezels, the 55” UD Series of Large Format Display (LFD) units measure only 5.3mm from bezel to bezel, dramatically reducing the distance between the parts of the image and enabling companies to create seamless and effective video wall solutions at any budget. The UD55A delivers 700 Nits of brightness with 1920×1080 resolution. Maintaining Samsung’s signature pristine picture quality, the UD55A includes two intelligent features that ensure the best picture is always displayed: Automatic Color Calibration automatically adjusts the White Balance on video walls; while a detachable Ambient Brightness sensor automatically adjusts the on-screen brightness in conjunction with the ambient light level of the area surrounding the display.

Providing full connectivity options, the UD55A includes one D-SUB, one DVI and two HDMI ports, in addition to a DVI-out interface, which enables the seamless sharing of content among up to 100 monitors. The UD55A also features a built-in network PC running Microsoft Windows Embedded Standard 2009, along with Samsung’s exclusive MagicInfoTM software, for effortless content management over a network. Additionally, the RJ45 interface, included with the monitor, provides users with long distance remote control abilities via LAN. likethis
What's your reaction?
Awesome
0%
Epic
0%
Like
0%
I Want This
0%
Meh
0%
Posted In
Computing, Hardware News, iGyaan, Latest, Microsoft, Samsung, Unboxing and Hands On
Tags
igyaan
igyaan
About The Author

Bharat Nagpal
Founder and Chief Editor of iGyaan. Bharat likes to keep on top of technology ! Follow Him on Google Plus : Google+
You Might Also Like
ComputingHardware NewsiGyaanLatest
Read More