GoPro Hero4 : Ups a Number and the Frame Rate 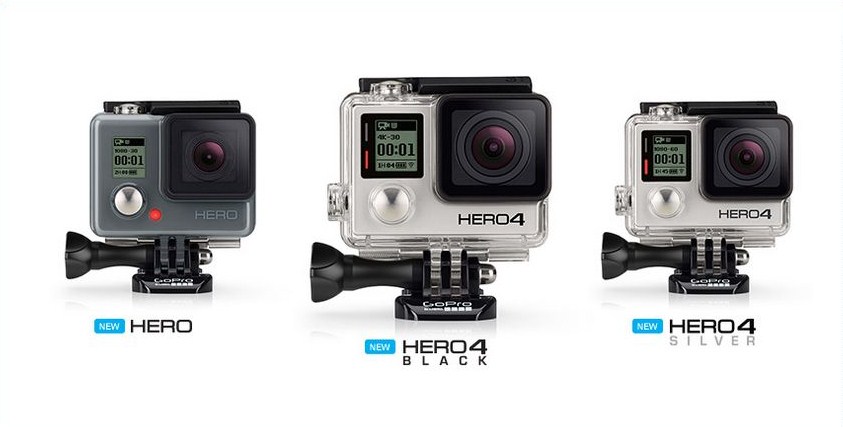 GoPro’s have taken us from being mere spectators of awesome action sports to first person observers. Watching the huge repository of GoPro videos on the internet, you can almost feel the adrenaline rushing through your veins. They are incredibly convenient and using them in drones is letting people get movie-like aerial shots for their home videos. Now GoPro is taking its pocket-sized badass cameras to the next level.

The company’s latest offering, the Hero4 lineup builds on the legacy and comes with great new upgrades. On the top of the line-up is the Hero4 Black, which comes at a price of $499. It shoots 4K video at up to 30 frames per second giving you some incredible eye-popping visuals. Apart from that, it shoots Full HD (1080p) at 120 frames per second so you can play with some slow-motion action shots. And of course, it offers 12-megapixel photos for folks who want a selfie at an epic destination. Next in line is the GoPro Hero4 Silver, priced at $399. Most of its specs are similar to the Hero4 Black apart from the fact that it shoots 4K at 15 fps. The feature that will entice most customers to get this device is the built-in touchscreen LCD screen. For other GoPro models, you need to buy this additional screen for $80.

To offer pure, effortless adventure shooting, the cameras shoot on MicroSD cards and work 40 meters underwater. With these, underwater shooters can say goodbye to the massive and expensive camera housings, they need to carry underwater with the risk of them getting destroyed.

There is also a phone application called GoPro app which can be used to control your camera remotely, view and share your content, and watch the GoPro Channel. Using this app you can turn your phone into a remote viewfinder for your camera. There are multiple kinds of accessories that you can buy for all your action shooting needs. Though they will set you back $20 to $80 per accessory. The new Hero line-up will be ready for shipping by October 5th, just in time for you to get one to capture the Diwali fireworks.

Check out the amazing visuals shot from the new generation GoPro’s:

Happy Nagashetti
iGyaan Network's newbie Happy is a Technological Hedonist, Traveller, Photographer, Curious Humanoid and a giant foodie who is always pumped up for new adventures.
You Might Also Like
CameraLatest
Read More