Huawei has launched its new flagship smartphones the Mate 20, Mate 20 X and Mate 20 Pro. The new devices replace the previous Mate series devices and offer improved specs and optics. The phones are built around Huawei’s new 7 nm chipset the Kirin 980 and offer varied specifications, along with varying price brackets. 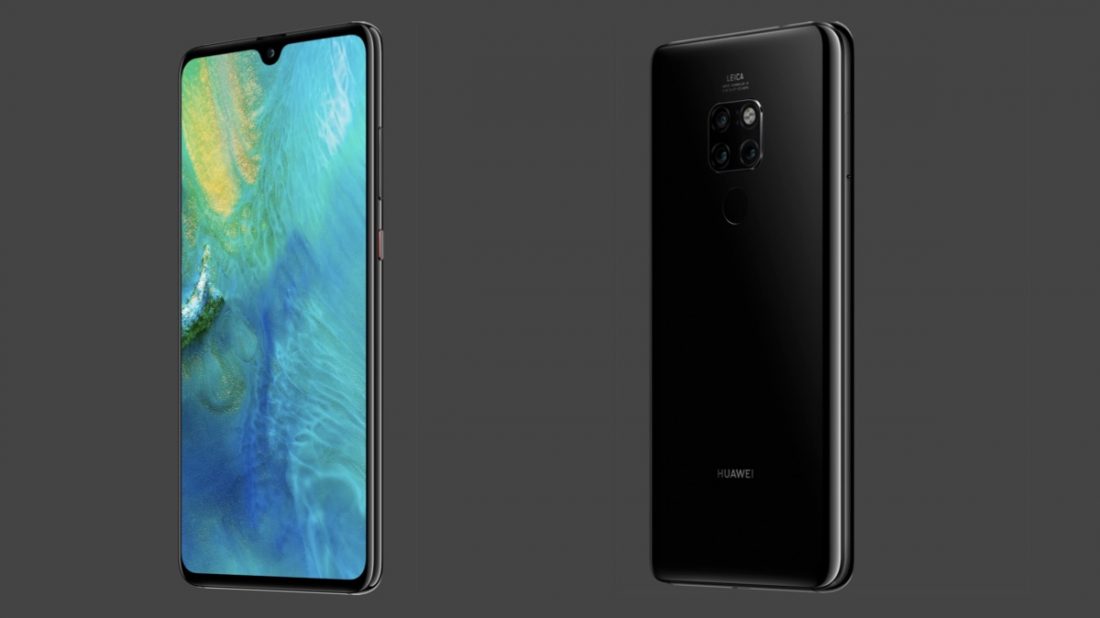 The lowest variant the Mate 20 is also the cheapest in price. The phone has a 6.53 inch display with a 2244 x 1080 px resolution and 381 ppi pixel density. The display has an 18:7:9 aspect ratio and features a water-drop notch on the top to house the front camera.

The Huawei Mate 20 has a rear mounted physical fingerprint reader and an IP 53 rating for dust and water resistance. The phone features a glass front and back design mounted on an aluminium frame. At the back of the phone are triple cameras with Leica lenses which were earlier teased by the company and placed inside a square camera mount. The primary camera is a 16 MP sensor with a wide-angle lens and an f/1.8 aperture. This is paired with an additional 12 MP ultra-wide sensor with an f/2.2 aperture. Finally an 8 MP telephoto f/2.4 aperture lens equipped camera completes the layout. This new camera setup allows Huawei to access a wide range of focus lengths from 16 mm to 270 mm. The front houses a 24 MP f/2.0 sensor inside the water drop notch, allowing for larger screen real estate than the Pro. The Mate 20 has either 4 GB or 6GB of RAM and is paired with 128 GB of storage, the phone also offers expandability via the NM cards which are unique to Huawei phones for now.

The phone has a 4000 mAh battery and will be available in four colours ; Midnight Blue, Black, Emerald Green and including the popular twilight colour option The Huawei  Mate 20 X is the largest of the three with a 7,2 inch display and a 2244 x 1080 px resolution. The phone also runs on the Kirin 980 platform, but is designed to impress the phablet market which now primarily is based around the Samsung Galaxy Note series.  The Mate 20 X has HUAWEI Supercool which features a liquid multi-dimensional cooling system with a Vapour Chamber and a Graphene Film.

The Mate 20 X has support for the HUAWEI M-Pen, which can be used to activate the Memo directly from a locked screen. The screen has a 4096 high level pressure sensitivity, which according to the company makes using the Pen, lifelike. While larger the Mate 20 X has an IP 53 rating for dust and water resistance. This is the only smartphone in the line-up to offer a dedicated 3.5 mm headphone jack. The fingerprint sensor is placed on the back under the square triple camera layout much like the Mate 20.  The camera layout is equipped with a Leica 40 MP Wide Angle Lens, f/1.8 aperture camera paired with a Leica 20 MP Ultra Wide Angle Lens, f/2.2 aperture based module. The 8 MP Telephoto sensor is the third sensor and offers a 3X zoom along with an f/2.4 aperture equipped Leica lens. The Mate 20 x has laser focus, phase focus and contrast focus along with Huawei AI Image Stabilisation.

The phone will be available in only one variant with 6GB of RAM and 128 GB of Storage, and will be expandable via a NM card to upto 256 GB. The battery is a massive 5000 mAh unit which supports Huawei’s fast charge capabilities. The Mate 20 X will only be available in two colours Phantom Silver and Midnight Blue.

The Huawei Mate 20 Pro as the name suggests offers better specs and is also the phone that will be sold globally and remains the true flagship launched by the company.

The Huawei Mate 20 Pro has a 6.39 inch curved OLED display with a  3120 x 1440 px resolution and 538 ppi pixel density. The phone has a full sized notch display with a 19:5:9 aspect ratio and Corning Gorilla Glass protection. Just like the Mate 20 the phone is based on the new 7 nm Kirin 980 chipset. This has dual neural processing units which help it compute solutions of task based questions. This allows for AI based camera modes that will automatically detect what you are shooting (like food, landscapes or portraits). The Mate 20 Pro also has larger camera sensors in comparison to the Mate 20. Still made in collaboration with Leica, the first is a 40 MP wide lens f/1.8 aperture based camera. Paired with a 20 MP ultra wide sensor with an f/2.2 aperture and an 8 MP telephoto sensor with f/2.4 aperture. While this gives the Mate 20 Pro more megapixels, the phone also features a wide ISO range up to 102,400 ISO. The camera also supports Super HDR capability and can shoot macro shots of objects as close as 2.5 cm. Just like the Mate 20 the varied camera setup allows for varied focal lengths ranging from 16 mm to 270 mm.

The Mate 20 Pro is the only phone of the three which is IP68 rated water and dust resistant. Huawei also provides a special underwater case for the Mate 20 Pro to allow for underwater photography upto a depth of 5 meter . The dual NPUs present in the device offers features such as AI Portrait Colour video. With this, you can implement effects in your videos, in real time. The device also offers a 3D live emoji feature which looks pretty similar to Apple’s Animoji. It has a new 3D live object modelling feature. With this you can just scan an object and the smartphone will recreate it in 3D. You can then animate this 3D model or can even integrate it with your surroundings using a skeleton mapping system. You can even interact with the 3D model if you are taking a photo or video, and it will mimic your actions.

The Huawei Mate 20 Pro features an in-display fingerprint sensor a first for the Chinese brand. The fingerprint reader uses a 10 level dynamic pressure sensing technology which improves the unlock speed, which has increased by 30% compared to the previous generation. The phone also offers up a 3D face unlock with an IR flood illuminator and 3D sensor placed next to the front cameras in the notch of the display.

The Mate 20 and Mate 20 Pro pack a 4,200 mAh battery, offering great battery back up. The company has also introduced a 40 W fast charger which it claims can charge 1 % in just 30 seconds. The fast charger and the device have gone through various security checks and procedures and are absolutely safe, according to Huawei. Huawei has also included a 15 W fast charging wireless charger. This is compatible with both the devices. Mukund Krishna Kumar
New At iGyaan, Tech Enthusiast and Devourer of Burgers and All Junk Food.
You Might Also Like
HuaweiLatestMobileTop Around the Web
Read More