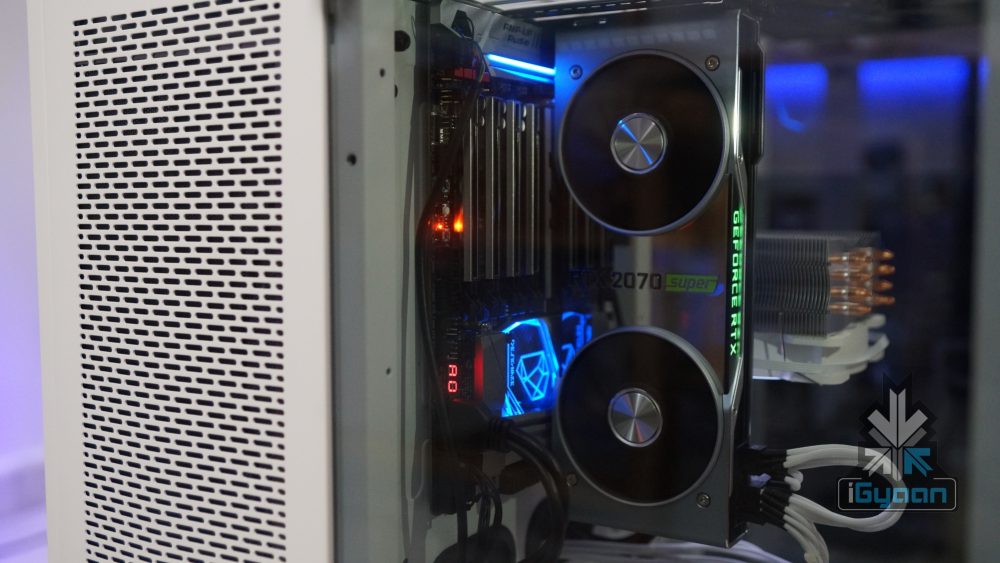 It is one of the best times to be a PC gamer. Both team green and team red have just unveiled its GPU lineups and they are a piece of work. AMD has seemingly kicked off this pseudo arms race of producing affordable yet powerful graphics card in the market. The Computex 2019 keynote had no doubtedly stirred NVIDIA to launch its SUPER cards just 10 months after its RTX lineup. It would mark the shortest reign of any team green generation. Now, we will see how the NVIDIA GeForce RTX 2070 SUPER holds true from the company’s promises. The RTX lineup from NVIDIA is being replaced by the new RTX SUPER series after AMD had apparently surpassed some of its cards. Team green claims that a noticeable 15-20% boost in performance will be seen across the board by SUPER cards over the vanilla RTX series. The review will be divided into different categories to cover all of the bases. NVIDIA has moved over from its angular centric cosmetics that it had featured with its past iterations of GTX 10 series cards. Team green has matured with its latest RTX cards that have an elegant and streamlined design philosophy. The GeForce RTX 2070 SUPER features a twin fan blade set up at the front which is housed in a mirror sheen metallic body. Notably, the last gen GTX cards features only a single blower fan setup. A rectangular shape is what we associate with any GPU design but the precision cut steel brick aesthetics have a unique charm to them. The front and the back carry the branding while the side has an LED backlit version of the same. All in all a great fit for minimalistic gamers after a plain aesthetics build. It should be noted that synthetic benchmark records raw performance and does not always translate to better performance in game. However, for productivity purposes these tests do matter and we have ran tests on the following benchmarking softwares. NVIDIA RTX 2070 SUPER is an upper range graphics card after all, so the focus on the test will be on the 4K range as it is more than capable of dishing out 120+ FPS at max settings on 1080p for most games. So, to see how the sub $500 video card performs we had every game set to its highest possible settings, this includes V-Sync & Motion Blur being turned off on the high resolution. Anti-Aliasing will be turned on to the highest as well to see just how far the card can go. We have tested the GPU on the following games by using NVIDIA’s proprietary benchmarking software FrameView. NVIDIA’s graphics card are known to traditionally consume lesser power, have lower temps and run quieter over its competitors. It holds true in this regards as well. The GeForce RTX 2070 SUPER reached the lower 79 degrees Celsius during our stress tests. With prolonged use 80+ degree Celsius is possible but it is highly unlikely that most users would hit those high temperatures. The fans on the Founder’s Edition reached 54-56dB under heavy load and are as capable of any triple fan iterations that are sold from other brands like MSI or Gigabyte. Due to efficient draw of power and the subsequent cooler temps, the fans run less harder and also make less noise. It is one of the better video cards if cooling and noise are users concern.

NVIDIA has just unveiled a new integrated frame benchmarking & power mapping tool by the name of “FrameView”. The new software enables accurate real-time information regarding game performance like FPS and average FPS across multiple percentile, power drawn from the board, completely customisable overlay and even a log file for analytics. The feature is currently in beta and can be downloaded directly from NVIDIA’s official website. Notably, the software was used to obtain gaming benchmarks seen above for this review. The cryptocurrency mining fad had left the PC components market in disarray and we finally see a great comeback being made from the company. AMD and NVIDIA are neck in neck in the mid range GPU market which only encourages competition that benefit consumers. We strongly recommend this card to gamers that are looking for great performances at a reasonable price tag. The upper range card is being sold for $499 (INR 43,600 in India) with various 3rd party versions also being available. Considering the launch price of the vanilla RTX 2070 ($599) and the last gen flagship GTX 1080 Ti ($699), the NVIDIA RTX 2070 SUPER is well worth its price for the competitive performance offered. Hence, the launch of this card also shifts the price range of upper range GPUs to a lower cost of entry.

likethis
What's your reaction?
Awesome
100%
Epic
0%
Like
0%
I Want This
0%
Meh
0%
Posted In
Games and Gaming, Latest, Review, Top Around the Web
Tags
RTX
RTX
About The Author