Unboxing : HTC One ME

by Bharat NagpalJune 27, 2015
7
Now Reading
Unboxing : HTC One ME
Browse This Page HTC has a new handset on the block and it is called the One ME. With improvements in terms of hardware and software all around, the One Me also features a matte finish back, 2 TB micro SD support and the latest Sense 7.0. HTC has taken the new design philosophy of the One M9 and tricked it down to the One ME. With the Notorious new chipset in there, many will ask why HTC decided to go with Mediatek.

The Helio X10 chipset has promising capabilities, it supports display refresh rates of up to 120Hz and slow-motion video recording at up to 480fps at an undisclosed resolution. The Helio X10, which is a 64-bit chipset with eight Cortex-A53 cores clocked at 2.2GHz also has the PowerVR G6200 GPU. Hardware wise the One Me packs a good set, a 2K display, 3 GB of RAM and 32 GB of storage which can go upto 2TB with the use of an external microSD. However only recently a 200GB card was released, 2TBmight be further away than expected.

The handset feels greta in the hand, this White with gold colour is synonymous with the HTC One E9+, however the One ME has a matte white back as opposed to the glossy white on the E9+ . The accents are polished in a rose gold and look fantastic. Rose gold is also used in the front metal parts and the bezel along with the frame which is one single unit, and again looks elegant. With our initial usage the phone has not heated up, despite rumours, however we are testing further.

Stay tuned for our full review. 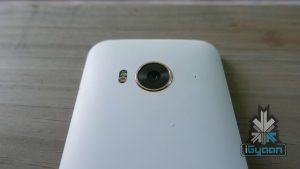 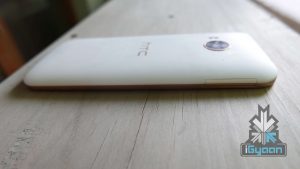 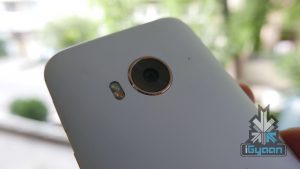 Bharat Nagpal
Founder and Chief Editor of iGyaan. Bharat likes to keep on top of technology ! Follow Him on Google Plus : Google+
You Might Also Like
HTCLatestUnboxing and Hands On
Read More