by Nikita NoronhaJuly 28, 2015
9
Now Reading
Here is Everything You Need to Know About the One Plus 2
Browse This Page

It’s out and how. Already creating a buzz by being the first to introduce their newest addition to the One Plus family on VR, Co-founder, Carl Pei insisted on letting everyone live their experience of launching the highly coveted One Plus 2. Now that it’s formally out, here is everything you need to know about the One Plus 2:

The VR launch that took place, had founders Carl Pei and Pete Lau teasing viewers with the speculation of the price. Even till the very end, they didn’t formally announce the numbers but instead took to Twitter to announce the cost. The 16GB variant costs Rs. 22,999 and the 64GB costs Rs. 24,999. With the minor difference in price, one wouldn’t consider buying the 16GB at all, don’t you think? While most phones that they have as competition, cost exorbitant amounts, the OnePlus 2 comes at a reasonable price for the specs its offers and the upgradation it has been through. The One Plus 2 will hit the markets of US, China, Canada and India, on August 11th. A few months back the company had admitted that India is one of their priority markets. Reservations and invites for the purchase of the phone can be done on https://oneplus.net/invites. In addition to this, Pei has announced that there will be nine pop up stores all over the world that allow you to experience the One Plus 2 before purchasing it.The pop up stores will also have invites as well as goodie bags that you can take back. The experience zones will open in India, in Bangalore and Delhi. The address for the stores are as mentioned below:

The makers of the Qualcomm Snapdragon 810 claim that this is “the most advanced chip they have ever made.” Naturally then, this has to be fitted onto the most advanced phones of its time.  This is a huge improvement from the OnePlus One as it will be able to take both front and back camera pictures without a drop in superior quality, the 4G LTE connectivity will be smooth and the gaming experience will also be pleasurable. Pei stated that OnePlus has focused on and built their phone around the processor, instead of gimmicky features.

People who have had the opportunity to fiddle with the One Plus 2, before its launch, said that the built was good with a Magnesium Aluminium alloy frame running around the phone, that gave it a classy look. It has polished steel buttons, and you can customise your Home and Back buttons to your liking. When it comes to the display, with a 5.5″ display, and a really bright screen that allows you to use your phone in the brightest of sunlight, the display of the OnePlus 2 will surely not disappoint. One can reduce the brightness with the Dark Mode option too. For the complete spec sheet click here. This is touted as the most convenient feature and the company claims that the fingerprint sensor is actually faster than the iPhone. It can register 5 fingers and is an excellent security feature that is easy to use.

We usually find it embarrassing when our phone starts ringing in a meeting and we have to turn the Home screen on, in order to activate the Silent mode. However, the One Plus 2 has an Alert Slider at the side of the phone itself, which allows you to slide between the options of no notifications, some notifications and all notifications. So, you can toggle between the three, at your own convenience. 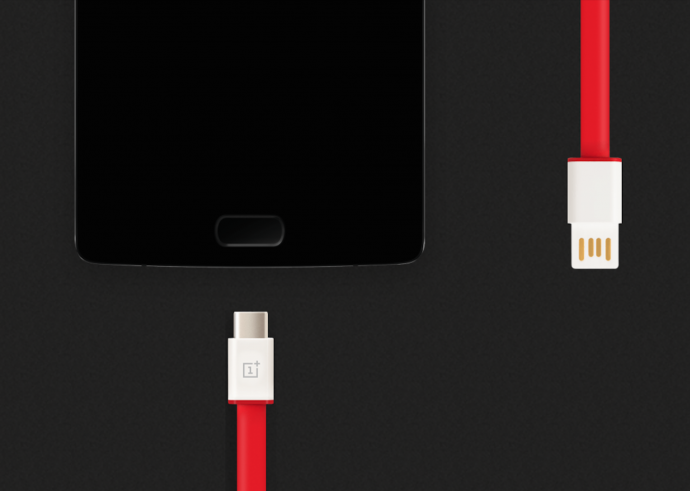 This is the first major company to have include feature in their phones. And in addition to this, the USB port will also have a patented reversible side that will allow you to plug it into any device you want.

The OnePlus One had received mixed responses in relation to the black sandstone finish cover that it had. However, this time around, OnePlus 2 gives you four other options in addition to the basic black that they were offering. Therefore, you can change the back cover in a matter of seconds and completely customise your phone from the outside as well as inside. Fancy, right?

The phone is supported by OxygenOS that isn’t purely Android and carries some minor changes. With additional features like Dark Mode, Customisable LED options, you can control your apps with the notifications you want and silence the ones you don’t want to be bothered by too. It also has a newly embedded Camera app that includes the slow motion option that allows you to take 120 frames per second and is also fit with an automatic Time Lapse Mode.

Lastly, everyone wanted the camera to be better and OnePlus 2 has lived up to its expectations. It has a 13MP rear camera and a 5MP front camera that makes picture taking, easy and crystal clear. One very important addition to the camera is OIS (Optical Image Stabilization) that allows you to take pictures despite having a shaky hand as its focus point becomes strong. The camera is also fitted with a Laser Focus System that scans the screen for the perfect focal point and also takes less than 0.3 seconds to shift the focus point, without causing a blur. Thus, the company claims that the OnePlus 2 is ready to conquer anything from a scenery to night photography, with utmost ease. Carl Pei and Pete Lau are proud of their endeavour to ‘Never Settle,’  by attempting to create a future-proof phone.

Do you have faith in the OnePlus 2, as well? Let us know.

Nikita Noronha
Nikita Noronha is the sub-editor for iGyaan. Her interests include photography, movies and of course, any kind of good food.
You Might Also Like
LatestMobileOnePlus
Read More