With time, we have given super (read smart) powers to our phones, laptops, cars and even, washing machines. Next in line, is Super Stationary. It’s helpful, needed and makes us wonder why no one thought of it before. A product which comes under this category is the WorldPenScan X. Using this portable pen, you can scan sentences from a physical document and convert it into editable text. More so, it understands and translates over nine languages. The gadget is available for $149 (approx. Rs. 9723).

It started off as a Kickstarter project, and 264 backers contributed $34,652 to get the project rolling. On paper, it sounds like an extremely useful device to have around. So, here we check out if the device is worth the hype. 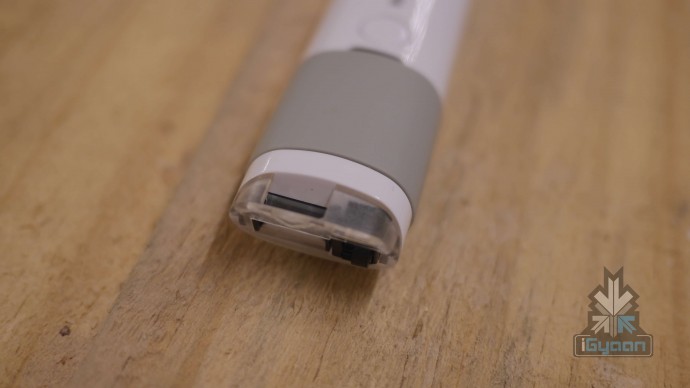 Its basic function is to scan and transfer data onto any mobile device or PC. An added perk includes, translating sentences into multiple languages. The box includes, the pen, a much-needed user manual, a standard charging cord and documentation. Once you unbox the device, to get started you need to install an app onto your PC or your mobile device. Since we’re constantly on the go, we decided to pair the pen with the iPhone 5. We downloaded the app which accompanies the device called ‘WorldPenScan X’. This device can be paired with Android devices, Windows, as well as Mac. In the box, they’ve provided a CD with the needed software. If you don’t have a CD Drive on your laptop/PC, you can download the software from their website (click here.)

Download the iOS app here and the Android app here. The WorldPenScan X resembles old-school fluorescent-coloured highlighting pens, which were the reason our dreary school books were covered in multiple colours. It is slightly large, so tedious to hold over a period of time and has an outer covering of shiny, slippery plastic along with a plastic cap. To ensure that dust doesn’t settle within the scanner, we’d strongly recommend you hold on to the cap. To clean the scanning port, use a soft brush and wipe it clean frequently. The plastic is complemented with a rubberised panel on the device, which helps with the grip and ensures that it can be used for long hours.  Other than the slippery body, the build is solid and its size ensures that the device is handy. Thanks to the sturdy build, you’re okay with tossing it into your bag.

Coming to the app, its interface is simple to understand and easy to use.  Pairing the device couldn’t have been simpler – all you need to do is turn on the Bluetooth of your phone and launch the app. At the same time, make sure that the Pen Scanner is turned on; and you’re good to go. The device does require charging however it isn’t necessarily tedious. We charged it once fully, and it has been in use for a few days now. Once you have gotten past connecting your smartphone to the WorldPenScan X, using it on an everyday basis, is a breeze. After using it for a few weeks, here are some of the points we noted:

A major plus – the device automatically switches off when it detects it is not in use. This, we suspect, is the reason for its long battery life. However, you can’t charge it and use it at the same time.

We do wish that they had added a bigger head, since the device fails to read fonts bigger than a certain size. We tested multiple font sizes, anything above the standard 25pt, the pen has trouble reading. While it has small issues that it needs to overcome, it serves the purpose. It manages to convert printed documents into editable text, which is quite a feat. If even a small part of your everyday work life revolves around copying text from a document, we’d strongly recommend you invest in the WorldPenScan X. Even though the device itself needs certain refinements, it’s a step in the right direcion. We’d recommend every office to have it’s own World Scan X. Like we said, it is the Stationary from the future.